1.Coal and ash handling plant:The coal is transported to the power station by road or rail and is stored in the coal storage plant. Storage of coal is primarily a matter of protection against coal strikes, failure of transportation system and general coal shortages. From the coal storage plant, coal is delivered to the coal handling plant where it is pulverized (i.e., crushed into small pieces) in order to increase its surface exposure, thus promoting rapid combustion without using large quantity of excess air. The pulverized coal is fed to the boiler by belt conveyors. The coal is burnt in the boiler and the ash produced after the complete combustion of coal is removed to the ash handling plant and then delivered to the ash storage plant for disposal. The removal of the ash from the boiler furnace is necessary for proper burning of coal. 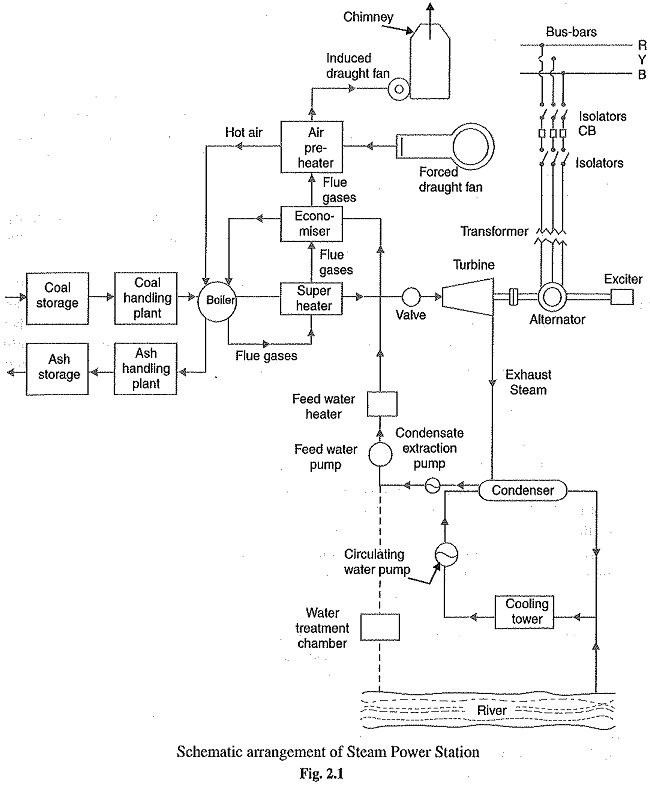 It is worthwhile to give a passing reference to the amount of coal burnt and ash produced in a modern themial power station. A 100 MW station operating at 50% load factor may burn about 20,000 tons of coal per month and ash produced may be to the tune of 10% to 15% of coal fired i.e., 2,000 to 3,000 tolls. In fact, in a thermal station, about 50% to 60% of the total operating cost consists of fuel purchasing and its handling.

Boiler:The heat of combustion of coal in the boiler is utilised to convert water into steam at high temperature and pressure. The flue gases from the boiler make their journey through super­heater, economiser, air pre-heater and are finally exhausted to atmosphere through the chimney.

Superheater: The steam produced in the boiler is wet and is passed through a superheater where it is dried and superheated (i.e., steam temperature increased above that of boiling point of water) by the flue gases on their way to chimney. Superheating provides two principal benefits. Firstly, the overall efficiency is increased. Secondly, too much condensation in the last stages of turbine (which would cause blade corrosion) is avoided. The superheated steam from the superheater is fed to steam turbine through the main valve.

3.Steam turbine: The dry and super heated steam from the super heater is fed to the steam turbine through main valve. The heat energy of steam when passing over the blades of turbine is converted into mechanical energy. After giving heat energy to the turbine, the steam is exhausted to the condenser which condenses the exhausted steam by means of cold water circulation.

4.Alternator: The steam turbine is coupled to an alternator. The alternator converts mechanical energy of turbine into electrical energy. The electrical output from the alternator is delivered to the bus bars through transformer, circuit breakers and isolators.

5.Feed water. The condensate from the condenser is used as feed water to the boiler. Some water may be lost in the cycle which is suitably made up from external source. The feed water on its way to the boiler is heated by water heaters and economizer. This helps in raising the overall efficiency of the plant.

In order to achieve overall economy, the following points should be considered while selecting a site for a steam power station :

1.Supply of fuel: The steam power station should be located near the coal mines so that transportation cost of fuel is minimum. However, if such a plant is to be installed at a place where coal is not available, then care should be taken that adequate facilities exist for the transportation of coal.

2.Availability of water: As huge amount of water is required for the condenser, therefore, such a plant should be located at the bank of a river or near a canal to ensure the continuous supply of water.

4.Cost and type of land: The steam power station should be located at a place where land is cheap and further extension, if necessary, is possible. Moreover, the bearing capacity of the ground should be adequate so that heavy equipment could be installed.

5.Nearness to land centres: In order to reduce the transmission cost, the plant should be located near the centre of the load. This is particularly important if c. supply system is adopted. However, if a.c. supply system is adopted, this factor becomes relatively less important: It is because a.c. power can be transmitted at high voltages with consequent reduced transmission cost. Therefore, it is possible to install the plant away from the load centres, provided other conditions are favourable.

6.Distance from populated area: As huge amount of coal is burnt in a steam power station, therefore, smoke and fumes pollute the surrounding area. This necessitates that the plant should be located at a considerable distance from the populated areas.

Conclusion: It is clear that all the above factors cannot be favourable at one place. However, keeping in view the fact that now-a-days the supply system is a.c. and more importance is being given to generation than transmission, a site away from the towns may be selected. In particular, a site by river side where sufficient water is available, no pollution of atmosphere occurs and fuel can be transported economically, may perhaps be an ideal choice.