Fig. 12.2 shows the Intel 8051 Architecture and 8031 Architecture. It consists of a Central Processing Unit, two kinds of memory (data RAM plus program ROM/EPROM) Input/Output ports, the mode status, and data registers and random logic needed for a variety of peripheral functions. These elements communicate through an eight bit data bus which runs throughout the chip referred as internal data bus. This bus is buffered to the outside world through an I/O port when memory or I/O expansion is desired. 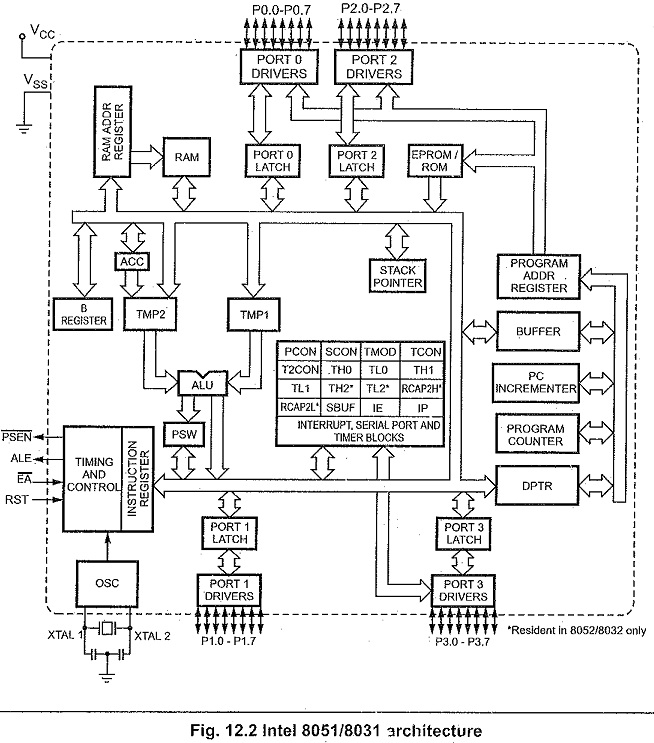 The CPU of 8051 Architecture consists of eight-bit Arithmetic and Logic unit with associated registers like A, B, PSW, SP, the sixteen bit program counter and “Data pointer” (DPTR) registers.

The 8051’s ALU can perform arithmetic and logic functions on eight bit variables. The arithmetic unit can perform addition, subtraction, multiplication and division. The logic unit can perform logical operations such as AND, OR, and Exclusive-OR, as well as rotate, clear, and complement. The ALU also looks after the branching ‘decisions. An important and unique feature of the Intel 8051 Architecture and 8031 Architecture is that the ALU can also manipulate one bit as well as eight-bit data types. Individual bits may be set, cleared, complemented, moved, tested, and used in logic computation.

It is an 8-bit register. It holds a source operand and receives the result of the arithmetic instructions (addition, subtraction, multiplication, and division). The accumulator can be the source or destination for logical operations and a number of special data movement instructions, including look-up tables and external RAM expansion. Several functions apply exclusively to the accumulator : rotate, parity computation, testing for zero, and so on.

In addition to accumulator, an 8-bit B-register is available as a general purpose register when it is not being used for the hardware multiply/divide operation.

Many instructions implicitly or explicitly affect (or are affected by) several status flags, which are grouped together to form the Program Status Word. Fig. 12.3 shows the bit pattern of the program status word. It is an 8-bit word, containing the information as follows. 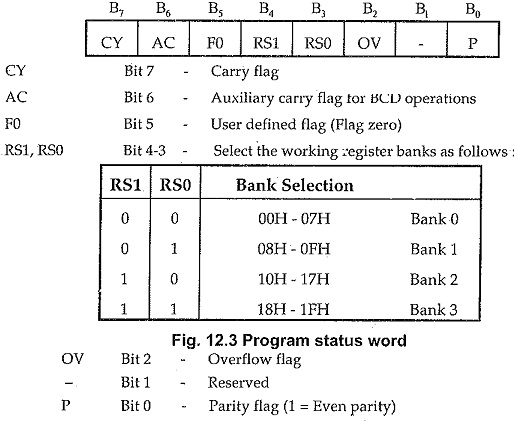 The stack pointer register is 8 bit wide. It is incremented before data is stored during PUSH and ALL instructions. The stack array can reside anywhere in on-chip RAM. The stack pointer is initialized to 07H after a reset. This causes the stack to begin at location 08H.

The data pointer (DPTR) consists of a high byte (DPH) and a low byte (DPL). Its function is to hold a 16 bit address. It may be manipulated as a 16 bit data register or as two independent 8 bit registers. It serves as a base register in indirect jumps, lookup table instructions and external data transfer. 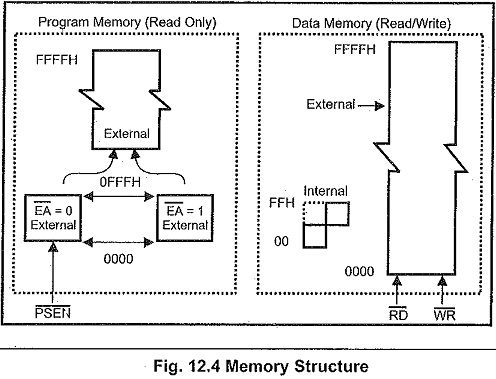 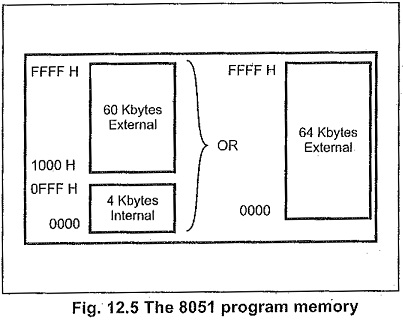 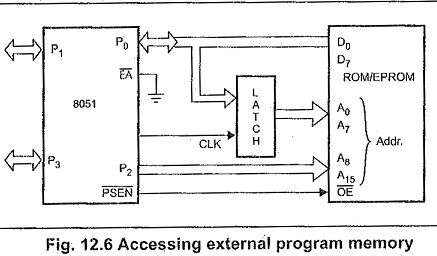 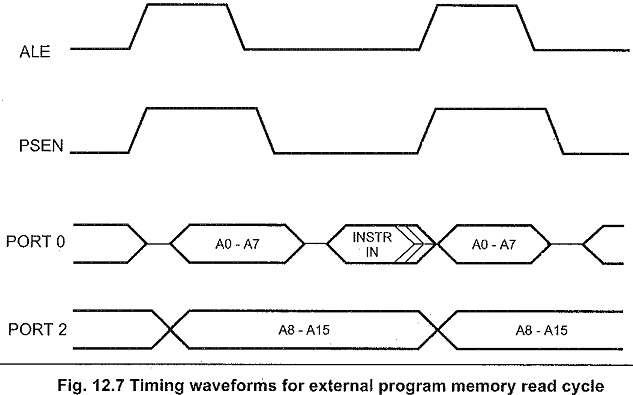 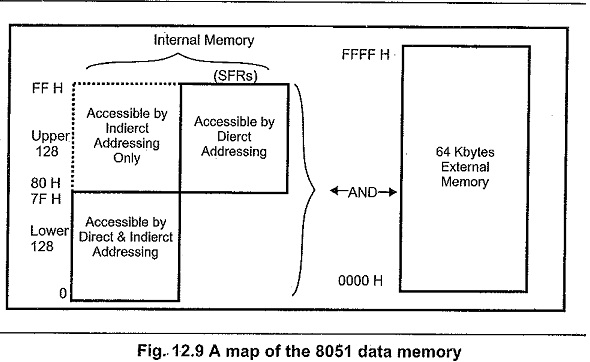 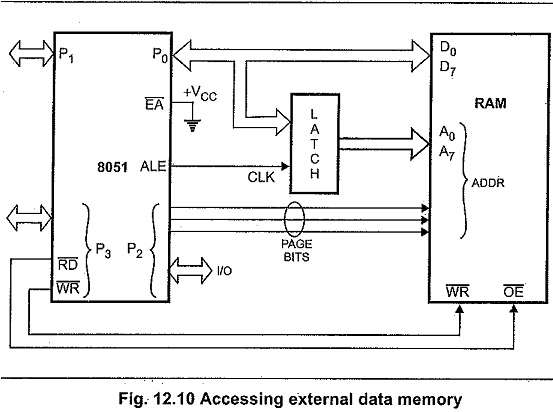 Fig. 12.11 (a) and (b) show the timing waveforms for external data memory read and write cycles, respectively. 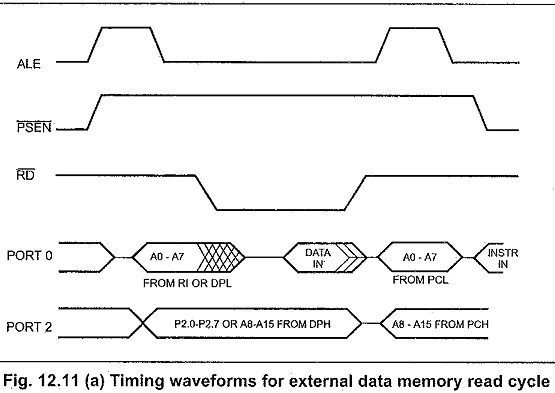 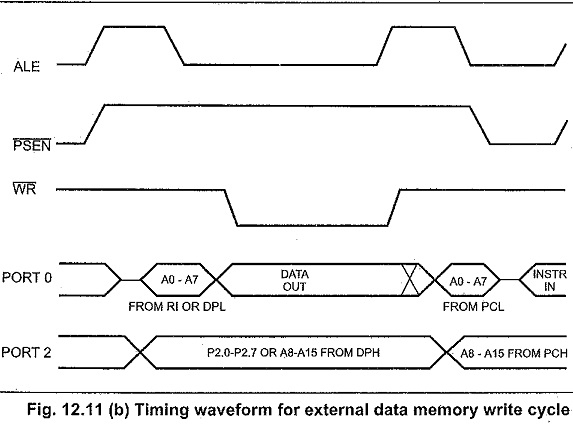 In addition to the program and data memory, there is another physical address space, some of these – B, SP, PSW, DPH and DPL registers are discussed earlier. Others-I/O ports and peripheral function registers collectively referred as special function registers will be introduced in the following sections.

Unlike other microprocessors in the Intel family, 8051 uses memory mapped I/O through a set of special function registers that are implemented in the address space immediately above the 128 bytes of RAM. Fig. 12.12 shows special function bit addresses. All access to the four I/O ports, the CPU registers, interrupt-control registers, the timer/counter, UART, and power control are performed through registers between 80H and FFH. 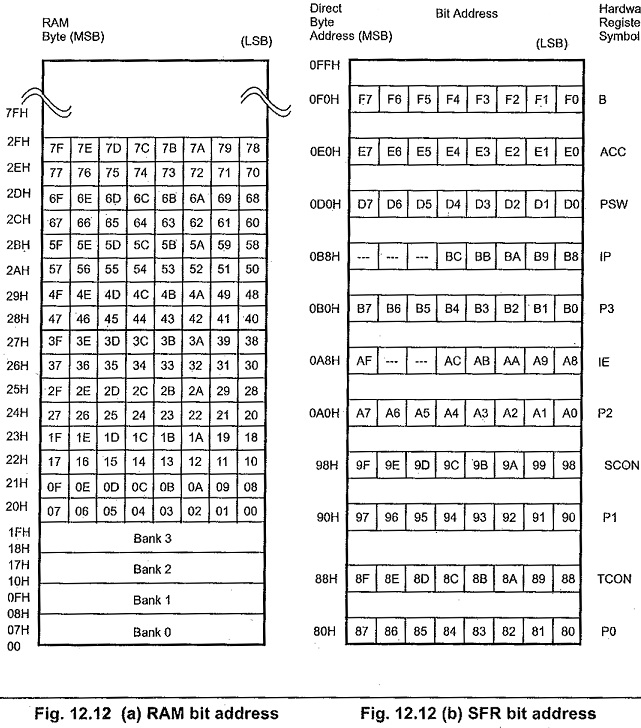 It consists of 4 register banks and 144 general purpose bits forming boolean processor RAM. Fig. 12.12 shows RAM bit addresses. The register bank-select bits refer to four 8 byte regions at the bottom of memory. Certain instructions can access these registers in RAM directly with 1 byte instructions, since 3 bits of the instruction specify the desired register. The RSO and RS1 bits in PSW must be set to the appropriate bank before execution of the instruction. This method of addressing saves one byte per instruction. The 144 general purpose bits can be used as software flags or program variables.

The MCS-51 family I/O port structure is extremely versatile. The 8051 has 32 I/0 pins configured as four eight-bit parallel ports ( P0, P1, P2, and P3 ). All four ports are bidirectional, i.e. each pin will be configured as input or output (or both) under software control. Each port consists of a latch, an output driver, and an input buffer. 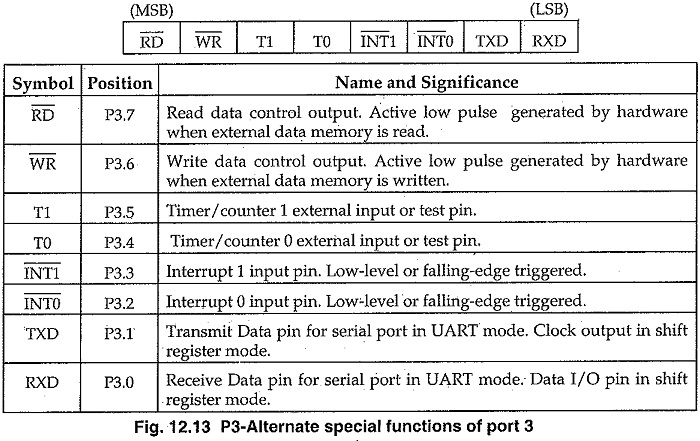 Fig. 12.14 shows a functional diagram of a typical bit latch and I/O buffers in each of the four ports. The bit latch is nothing but the one bit in the port’s SFR. It is represented as a D flip-flop. The signal “write to latch” acts as clock input for D flip-flop. The data from the internal bus is clock-in in response to a “write to latch” signal from the CPU. The Q output or Q output after inversion from D flip-flop is connected at the gate input of the drive FET. The On and OFF state of the drive FET due to the data available at the output of latch decides the status of the output pin. It is possible to read Q output of latch by activating “read latch” signal from the CPU. The actual port status can be read by activating “read pin” signal, as shown in Fig. 12.14. 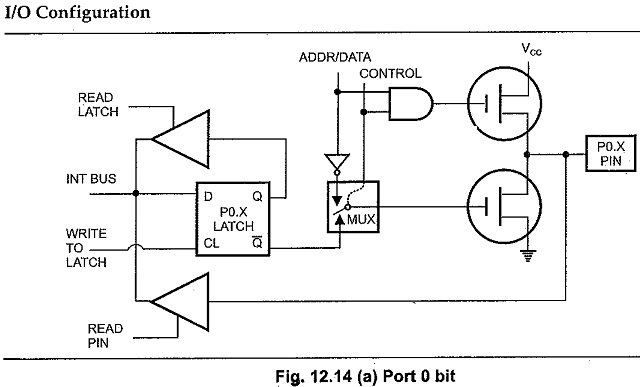 As.shown in the Fig. 12.14, for Port 0 and Port 2 drivers are switchable to internal ADDR/DATA and ADDR bus, respectively, by internal CONTROL signal. The switching is required to access external memory. During external memory acceses, the P2 SFR remains unchanged, but P0 SFR gets is written to it. 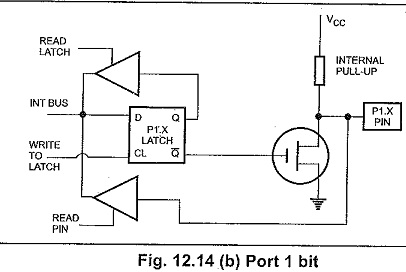 As mentioned earlier, Port 3 has multifunction pins. Therefore, each pin of Port 3 can be programmed to use as I/O or as one of the alternate function. This is achieved by the another control input, “Alternate output function’, as shown in the Fig. 12.14. When latch bit of Port 3 contains 1, the output level is controlled by control input, “alternate output function.” 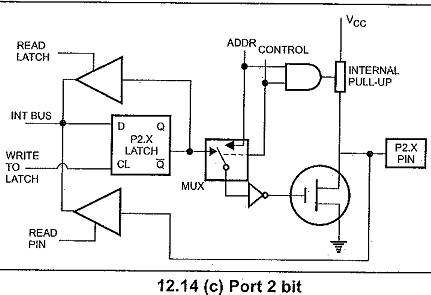 The port pin can be configured as an input by writing 1 in the latch bit of the corresponding pin. It turn OFF the output driver FET. Then for, Ports 1,2 and 3, the pin is pulled high by the internal pull-up, but can be pulled low by an external source. There is no internal pull-up for port 0. Therefore, its output pin floats when 1 is written in the latch bit, and pin can be used as a high impedance input. The port .0 is said to be “true bidirectional“, because when configured as an input it floats. 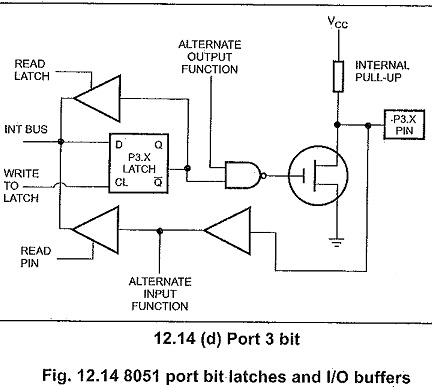 On the otherhand, the output of Ports 1,2 and 3 are pulled high with pull-up registers, when configured as an input. Thus they are sometimes called “quasi bidirectional” ports..

There are few common needs that microcomputer system should provide :

Until now, microprocessor systems needed peripheral chips such as timers / counters, USARTs, or interrupt controllers to meet these needs. The Intel 8051 Architecture and 8031 Architecture family integrates all these capabilities on-chip.