Bohr’s Atomic Model – Neils Bohr, a Danish physicist, put forward his model of atom in 1913. He retained Rutherford’s model of a very small positively charged nucleus at the centre. He also accepted the view that all the protons and neutrons (and hence most of the mass of the atom) are contained in the nucleus. He also agreed that the negatively charged electrons are revolving around the nucleus in the same way as the planets are revolving around the Sun. But he took a bold step for­ward by applying Planck’s quantum theory to the electrons revolv­ing around the nucleus. He postulated the following three funda­mental laws :

1. The electrons continue revolving in their respective orbits without losing energy. This is because energy in fraction of a quantum cannot be lost.

In other words, the energy of an electron remains constant as long as it stays in the same orbit. This led to the idea that each orbit is associated with a definite energy, i.e., with a definite whole number of quantas of energy. The orbits, therefore, are also known as energy levels or energy shells. Bohr’s Atomic Model gave numbers 1, 2, 3, 4, etc., (starting from the nucleus) to these energy levels, as shown in Fig. 4.1. These are now termed as principal quantum numbers. The various energy levels are also designated by letters K, L, M, N, etc. The farther the energy level from the nucleus, the greater is the energy associated with it. As long as the electron remains in a particular energy shell, it neither emits nor absorbs energy. 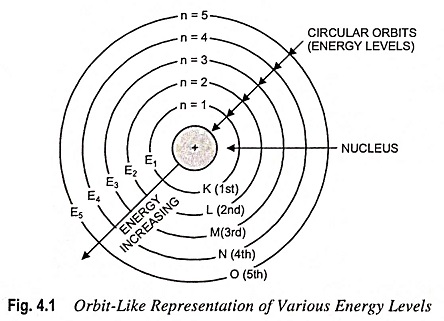 In a transition from one stationary state corresponding to a definite energy W2 to another stationary state, with an associated energy W1 radiation will be emitted. The frequency of this radiant energy is given by

where h is Planck’s constant in joule-seconds, the W’s are expressed in joules, and f is in hertz.

3. The angular momentum of an electron moving around the nucleus is quantized. An electron, like any other body moving in a circular orbit, has an angular momentum given by mrv where m is the mass, v is the velocity of the electron while r is the radius of the orbit. Bohr’s Atomic Model postulated that these orbits or energy levels are such that the angular momentum can have only definite or discrete values given by the expression

This principle is known as quantisation of angular momentum.

The energy level in joules of each state can be determined as follows: