Explain Conduction in Gas – The introduction of small amount of gas into the electron evacuated tubes entirely changes the operating characteristics—materially giving in general a greatly diminished voltage drop and correspondingly increased current. When the cathode of a vacuum tube is heated to its emitting temperature electrons are driven off and form an invisible cloud around the cathode. This cloud of electrons has a negative charge and tends to repel the similarly charged electrons as they leave the cathode. In effect this cloud of electrons tends to neutralize the attraction, due to plate having positive charge, of electrons in the space near the cathode. This is known as the space charge effect. The space charge effect in the vacuum tube limits the amount of current that can be carried by the tube. This is the reason that vacuum tubes are being used only for low current (of the order of milliamperes) applications. In gas-filled tubes the effect of space charge is neutralized and current carrying capacity is increased.

As electrons are emitted from the cathode of a gas-filled tube and move towards the positively charged plate, they collide with gas molecules and ionize them i.e. knock electrons out of the gas molecules. When the normally uncharged gas molecules loose electrons due to collision, they become positively charged and are known as ions. The positive ions in an ionized gas of an electron tube are attracted by cathode, but being relatively heavier they drift slowly. Thus space between the plate and cathode is filled with large number of positive ions. As the positive ions are practically stationary in the area around the cathode, so neutralize the effect of space charge and make the entire thermionic emission available as plate current. This is the reason that gas-filled tubes are able to carry several times the current carried by the vacuum tubes of similar size.

The phenomenon of Conduction in Gas is illustrated in Fig. 5.23. 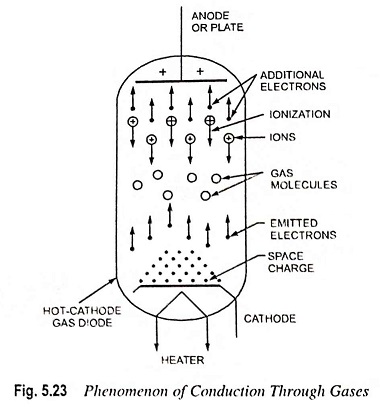 The energy required for ionizing the gas molecules by collision with high speed electrons is supplied by means of the plate-to-cathode voltage. A definite voltage value, ranging from 10 to 30 volts, exists for each type of gas at which ionization suddenly begins. The actual value of voltage for ionization depends on the gas and its temperature and pressure.