In most P-N junctions Steady State Conditions, the space charge region is small compared with its area and the doping is normally moderate to heavy. This results in a small resistance in each neutral region and only a small voltage drop can be maintained outside the space charge region. The effects of bias on the important properties of the junction are depicted in Fig. 6.53. 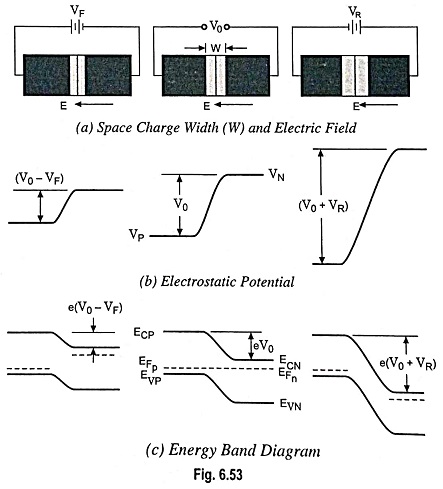 The shifting of the energy bands under bias means a separation of the Fermi energy levels on either side of the junction. In energy units of electron volts, the Fermi energy levels in the two neutral regions are separated by an energy eV numerically equal to the applied voltage V. Under forward bias the Fermi level on the N side EFn is above EFp by the energy eVF and for reverse bias EFp is eVR joules higher than EFn.

The hole and electron drift currents at the junction are independent of the applied voltage.

The total current across the junction consists of the sum of the diffusion and drift currents. As indicated in Fig. 6.54 electron and hole diffusion currents are from P to N, even though particle flow directions are opposite to each other and the drift currents are from N to P. The net current crossing the junction is zero at equilibrium. Under reverse bias both diffusion components are negligible. The current under equilibrium conditions is zero since the generation and diffusion currents balance each other.