Assuming Steady State Condition of the chopper, we have during TON

when the thyristor is OFF, free wheeling takes place and the operation is described by

which has the solution

The value of Ia can also be determined. The difference Ia – lo gives the peak to peak amplitude of the ripple superimposing the average dc current. 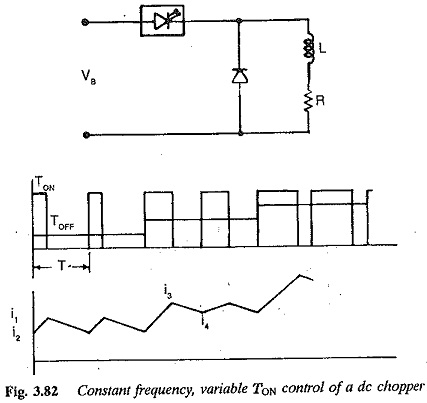 The amplitude of the ripple depends upon the time ratio a. Figure 3.82 depicts the variation of load current for different values of a. It can be seen from the figure that the ripple amplitude is maximum at a = 0.5 and decreases for both a > 0.5 and a < 0.5. These can be derived for d.c. series motor assuming it to be an R-L load using the above equations. For a separately excited motor, the back emf has to be considered. Assuming no losses in the motor, E = aVd. In this case,

solving which we get

The current at the end of TON = aT is

The solution for i shows a linear variation of current. The ripple superimposing the average dc current becomes triangular. The peak value of the ripple is

The rms value of the current

The ripple in the load current can basically be reduced by increasing the chopper frequency and by introducing an extra inductance in the load circuit.