In a commercial transistor the emitter is heavily doped and the base is very lightly doped and, therefore, electron current IeE is negligibly small in comparison to hole current IhE. Thus the entire emitter current IE in a P-N-P transistor is due to flow of holes from emitter to the base. It is to be noted that the indicated direction of IE external to the transistor is the conventional current direction. 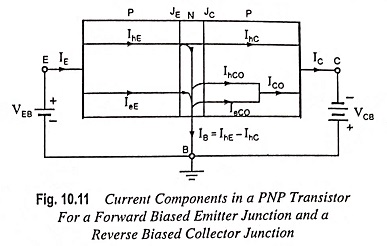 For a P-N-P transistor, ICO consists of holes moving across junction JC from base region to collector region and electrons crossing junction JC in the opposite direction.

In the active region operation with emitter junction JE forward biased, the collector current is given as

where α is the fraction of the total current IE which constitutes IhC.

Emitter Efficiency: The emitter or injection efficiency denoted by γ is defined as the ratio of current of injected carriers at JE to the total emitter current

Term α is called the large signal current gain of a common base transistor. The parameter α is extremely important in transistor theory. It is to be pointed here that α is not constant, but varies with emitter current IE, collector voltage VCB, and the temperature. Typically α lies in the range 0.95 to 0.99.

For an efficient transistor we would like β and γ to be very near unity i.e., the emitter current should be due mostly to holes (γ = 1) and most of the injected holes should eventually participate in the collector current (β ≈ 1).

DC Current Gain: If ICO is negligibly small in comparison to lC, α approximately equals IC/IE. This is referred to as the dc current gain of the common base (CB) transistor and is denoted by αdc

αdc is always positive and less than unity.

αac is always positive but less than unity (very close to unity). It also varies with IE, VCB and temperature.

The physical interpretation of Eq. (10.12) is that the P-N junction diode current crossing the collector junction JC is supplemented by a fraction α of the current IE flowing in the emitter.