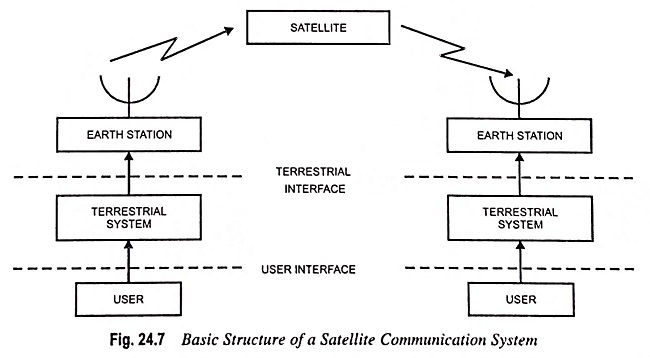 Commercial satellite communication system use a frequency band of 500 MHz bandwidth near 6 GHz for uplink transmission and another 500 MHz bandwidth near 4 GHz for downlink transmission. An uplink of 5.725 to 7.075 GHz and a downlink of 3.4 to 4.8 GHz is used. Since 6/4 GHz band is also used in many countries for microwave links (terrestrial communications), so the problem of mutual interference may occurs. The 500 MHz allocation of frequency band is usually divided into 12 channels of approximately 40 MHz each. This allows each of 12 transponders to carry one TV channel or 1500 analog FM voice circuits.

Modern satellite communication system also employ frequency reuse to increase the number of transponders in the allotted bandwidth. 6/4 GHz band is most popular because of less propagation problem. Rain attenuation and sky noise is low at 4 GHz so it is possible to build a receiving system. 14/12 GHz band is also used in commercial communication satellites because of over crowding of geostationary satellites at 6/4 GHz band. Here uplink is of 12.75 to 14.8 GHz and downlink of 10.7 to 12.3 GHz. This band may be extensively used in future. A third band is the 20/30 GHz band where 2.5 GHz bandwidth has been allocated with a uplink of 27.5 to 31 GHz and downlink of 18.1 to 21.2 GHz.

Some of the advantages and disadvantages of 6/4 GHz are given below:

Frequency of downlink is smaller than that of the uplink, several factors are there such as

The basic block diagram of an earth station transmitter is shown in Fig. 24.8.

The baseband signal from the terrestrial network is proc­essed through encoder and modulator, then it is converted to uplink frequency. Finally it is amplified by high power ampli­fier and directed towards the appropriate part of antenna. The block diagram of an earth station receiver is shown in Fig. 24.9.

The signal received from the satellite is processed through low noise amplifier and then it is down converted, demodulated by demodulator and decoded by de­coder. Thus the original baseband signal is obtained. In case of failure to maintain uninterruptable power some critical components will he installed with automatic switch over. The isolation of high power amplifier and low noise am­plifier is of much concern in the design considerations of an earth station. Some mutual interference effects may be there and these includes interference caused by side lobes if antenna in­terferes with an adjacent satellite or an earth station equipment. Other sources of interference are microwave relay links, sun tran­sit and intermodulation produces generated in the transponder.

Before 1983 the spacing between the two geostationary satellites was 4° of an equatorial arc and the smallest earth station antenna diameter was 5 m. Nowadays the spacing allowed between two adjacent satellite in space is 2° along the equatorial arc. The closer spacing has allowed twice as many satellite to occupy the same orbital arc, so nowadays every earth station antenna is designed accordingly.

Communication through satellite has several advantages and disadvantages. Until the evolution of satellite communication system, long distance communication through space could be done by using cascaded radio relays, very low frequency (below 30 kHz) and high frequency or short waves radio (3-30 MHz). But the cascaded radio relays were limited to overland spans. So the satellite has given a major contribution in the field of communication, capable of transmitting high capacity over long distances either overland or water. Also because of its unique geometry, it is inherently a broadcast medium with a natural ability to transmit simultaneously from one point to an arbitrary number of other points within its converge area.