What is Transistor Biasing? – Types of Biasing 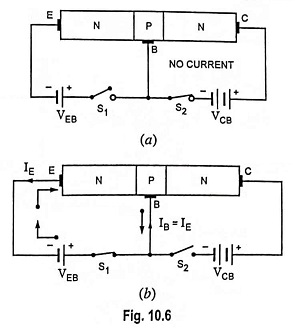 Now if the Transistor Biasing of collector-base junction is ignored and only emitter-base junction, which is forward biased [Fig. 10.6(b)] is considered then practically whole of the emitter current flows through the base i.e., IB = IE.

Different Operating Conditions For a Transistor: 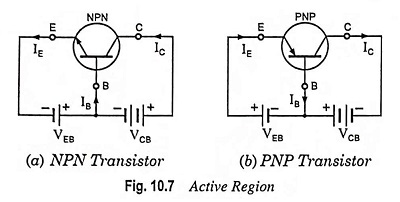 The voltages across the terminals of a transistor follow the usual double subscript voltage convention. For example VBE represents the voltage of base with respect to the emitter. If VBE is equal to 0.7 V it means the base is 0.7 V more positive.

In FR biasing the transistor is in active region and the collector current IC, depends upon the emitter current IE. Generally transistor is operated in this region for amplification.

For connecting batteries properly in the transistor circuits the following scheme may be remembered.

2. Forward-Forward Biasing: In this Transistor Biasing, both collector and emitter are forward biased, as illustrated in Fig. 10.8. The transistor operates in saturation region. In this region, the collector current becomes independent of the base current. Thus the transistor acts like a close switch.

3. Reverse-Reverse Biasing: In this Transistor Biasing, both the junctions are reverse biased. In this biasing, the transistor has practically zero current because the emitter does not emit charge carriers into the base and no charge carriers are collected by the collector except a few thermally generated minority carriers. Thus, the transistor acts like an open switch.

4. Reverse-Forward Biasing: In this Transistor Biasing, the emitter junction is reverse biased while the collector junction is forward biased. As the collector is not doped to the extent as the emitter is doped, therefore, it cannot inject the majority charge carriers to the base. So, in this region, the action of transistor is poor. This region is of little importance.

The active mode which is also called forward active mode, is the one used if the transistor is to operate as an amplifier. Switching operations (e.g., logic circuits) utilize both the cutoff mode and the saturation mode. The reverse active (or inverse active) mode has very limited application but is conceptually significant.