In order to explain many phenomena associated with conduction in gases, metals and semiconductors and the electron emission from a metal surface, it is necessary to assume that the atom has loosely bound electrons which can be torn away from it. On the basis of experiments on the scattering of α-particles, combined with the discovery of neutron made by Chadwick in 1932, Rutherford suggested a complete model of the atom which is known as Rutherford Nuclear Model of Atomic Structure. 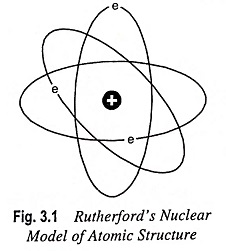 The charge associated with each electron is 1.602 x 10-19 C. Compared to mass of nucleus, electrons are relatively tiny particles of almost negligible mass (each electron weighing 9.107 x 10-31 kg). Protons and neutrons each have mass about 1,800 times the mass of an electron.

The diameter of an atom is approximately 10-10 m and that of nucleus is about 10-15 m. The ratio of e/m for an electron is equal to

Since it is not very easy to determine either the charge or the mass of an electron, electrons are usually identified by their high ratio of charge to mass. This is so high that a number of electrons making up a mass of 1 x 10-6 kg placed 100 km from a similar mass in air would experience a force of about 3 x 109 kg. No other particle has so high a value of e/m, so that recognition by this means is easy and certain.

The force of attraction between the electrons and nucleus follows Coulomb’s law. It can be shown from classical mechanics that the resultant closed path will be a circle or an el­lipse under the action of such a force. 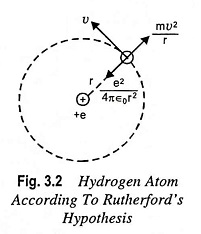 Let us consider a hydrogen atom having a single electron, re­volving around the nucleus which has a single proton, in a circular orbit with radius r as depicted is Fig. 3.2.

The force of attraction between the nucleus and the electron is

By Newton’s second law of motion, this must be equal to the product of electronic mass m in kg and the acceleration ν2/r toward the nucleus, where ν is the speed of the electron in the circular path, in m/s. Then

Furthermore, the potential energy of the electron at a distance r from the nucleus is

The kinetic energy is

Then, according to conservation of energy,

The assumptions that electrons were orbiting about the nucleus was unfortunate. According to the classical electromagnetic theory if a charged particle accelerates around an oppositely charged particle, the former will radiateenergy. If an electron radiates energy, its speed will decrease and it will go into spiral motion, finally falling into the nucleus, as shown in Fig. 3.3. This does not happen actually as then the atom would be unstable, which it is not. This was the chief weakness of Rutherford Nuclear Model of Atom. 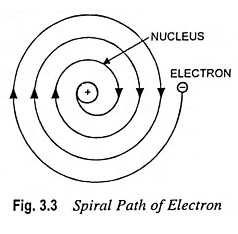 The other weakness of Rutherford Nuclear Model of Atom was that it fails to account for the following phenomenon.

When gases under low pressure are subjected to electric discharge line spectra are produced.