A generating station in which nuclear energy is converted into electrical energy is known as a nuclear power station.

In nuclear power station, heavy elements such as Uranium (U235) or Thorium (Th232) are sub­jected to nuclear fission in a special apparatus known as a reactor. The heat energy thus released is utilised in raising steam at high temperature and pressure. The steam runs the steam turbine which converts steam energy into mechanical energy. The turbine drives the alternator which converts mechanical energy into electrical energy.

The most important feature of a nuclear power station is that huge amount of electrical energy can he produced from a relatively small amount of nuclear fuel as compared to other conventional types of power stations. It has been found that complete fission of 1 kg of Uranium (U235) can produce as much energy as can be produced by the burning of 4,500 tons of high grade coal. Although the recovery of principal nuclear fuels (i.e., Uranium and Thorium) is difficult and expensive, yet the total energy content of the estimated world reserves of these fuels are considerably higher than those of conventional fuels, viz., coal, oil and gas. At present, energy crisis is gripping-us and, therefore, nuclear energy can be successfully employed for producing low cost electrical energy on a large scale to meet the growing commercial and industrial demands.

The schematic arrangement of a nuclear power station is shown in Fig. 2.7. The whole arrangement can be divided into the following main stages : 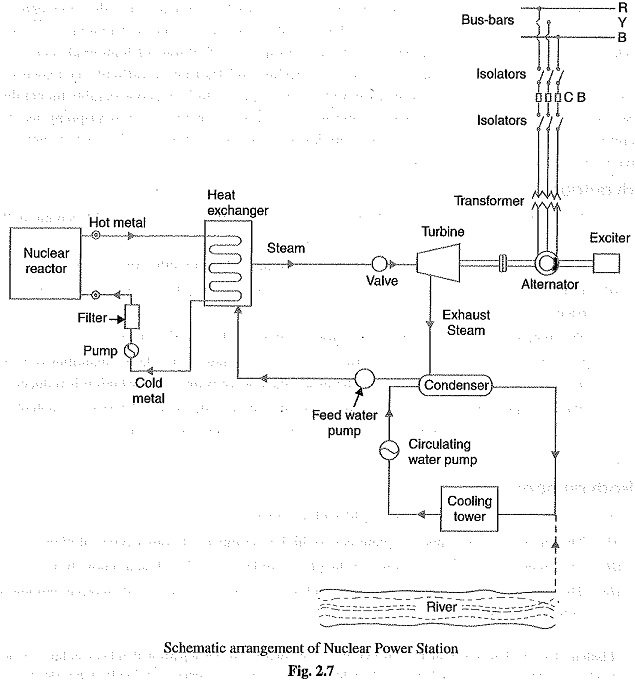 (1) Nuclear reactor. It is an apparatus in which nuclear fuel (U235) is subjected to nuclear fission. It controls the chain reaction* that starts once the fission is done. If the chain reaction is not controlled, the result will be an explosion due to the fast increase in the energy released. 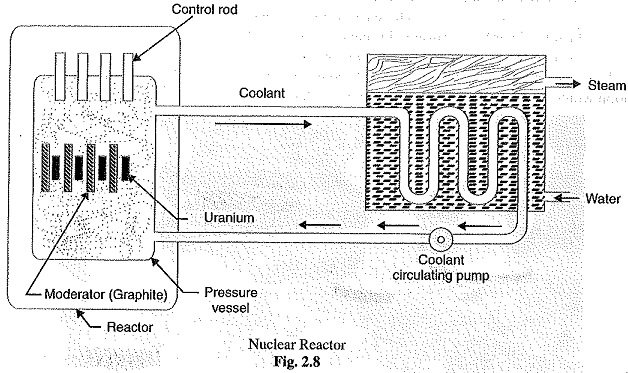 A nuclear reactor is a cylindrical stout pressure vessel and houses fuel rods of Uranium, moderator and control rods (See Fig. 2.8). The fuel rods constitute the fission material and release huge amount of energy when bombarded with slow moving neutrons. The modera­tor consists of graphite rods which enclose the fuel rods. The moderator slows down the neutrons before they bombard the fuel rods. The control rods are of cadmium and are inserted into the reactor. Cadmium is strong neutron absorber and thus regulates the supply of neutrons for fission. When the control rods are pushed in deep enough they absorb most of fission neutrons and hence few are available for chain reaction which, therefore, stops. However, as they are being withdrawn, more and more of these fission neutrons cause fis­sion and hence the intensity of chain reaction (or heat produced) is increased. Therefore, by pulling out the control rods, power of the nuclear reactor is increased, whereas by pushing them in, it is reduced. In actual practice, the lowering or raising of control rods is accom­plished automatically according to the requirement of load. The heat produced in the reac­tor is removed by the coolant, generally a sodium metal. The coolant carries the heat to the heat exchanger.

(2) Heatexchanger. The coolant gives up heat to the heat exchanger which is utilised in raising the steam. After giving up heat, the coolant is again fed to the reactor.

(4) Alternator. The steam turbine drives the alternator which converts mechanical energy into electrical energy. The output from the alternator is delivered to the bus-bars through trans­former, circuit breakers and isolators.

From the above mentioned factors it becomes apparent that ideal choice for a nuclear power station would be near sea or river and away from thickly populated areas.