Basics of Nuclear Engineering – A matter is composed of atoms. An atom consists of a positive charged nucleus surrounded by a number of negatively charged electrons. The atomic structures of hydrogen, Helium and oxygen are shown in Fig. 3.1. 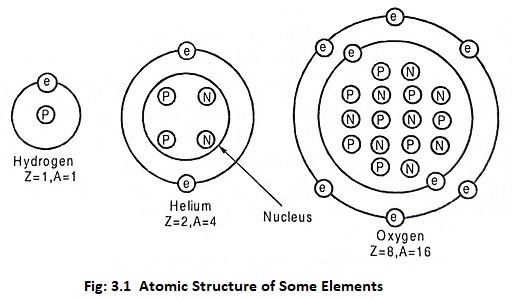 The nucleus contains protons and neutrons. The number of protons in a given atom is an atomic number (Z). So the atomic number for h is 1 and He is 2.

The isotopes having more than 80 are unstable. The nuclei of these isotopes are unstable and radio active and they decay by emitting electromagnetic radiations in the form of α – particles, β particles and γ particles.