An ideal current source provides a constant current regardless of the load connected to it. There are many applications in electronics for a circuit that provides a constant current with a very high impedance. Constant Current Source in Differential Amplifier can be built using FET devices, bipolar devices, and a combination of these components. There are circuits used in discrete form and others more suitable for operation in ICs. Some forms of both types will be considered here.

Figure 20.16(a) depicts a simple JFET current source. With VGS set to zero volt, the drain current ID is fixed at IDSS = 10 mA. The device operates like a current source of magnitude 10 mA. 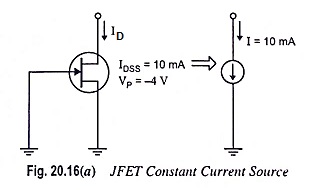 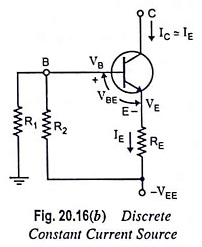 Constant current lC is given by the following equation

assuming the base input impedance much larger than R1 or R2.

If resistor R2 is replaced with a zener diode in the circuit depicted in Fig. 20.16(b), an improved constant current source is obtained in Fig. 20.17. 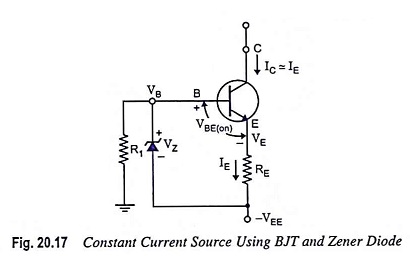 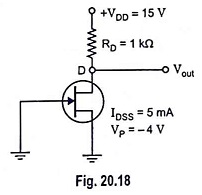