As discussed in Art. 25.3, light waves can be treated as particles, which are referred to as photons. The energy of a photon is E = hf where h is Plank’s constant and f is the frequency. Wavelength and energy can be related by

where E is the photon energy in eV and c is the velocity of light.

Photons can interact with

Interaction with valence electrons is of more interest as these collisions generate sufficient energy to elevate electrons into the conduction band. This further generates electron-hole pairs (EHP) and produces excess carrier concentrations.

Photons with an energy larger than the band gap energy are absorbed by materials. Where the valence band contains many electrons and the conduction band has many empty states the photon absorption is higher when the electrons may be excited. 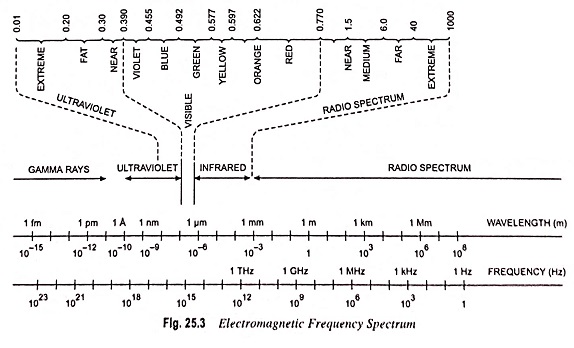 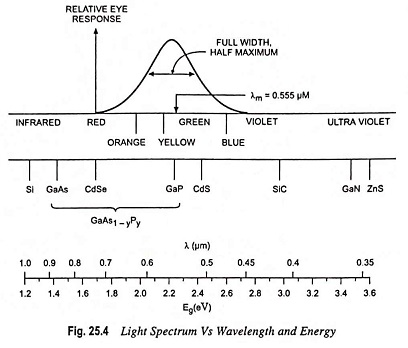 Figures 25.3 and 25.4 give the band gap energy of some semiconductors and details the visible, infrared and ultraviolet part of the spectrum

GaP and CdS have band gaps wide enough to pass photons in the visible range. A semiconductor absorbs photons with energies equal to the band gap or larger. Silicon (Si) absorbs not only band gap light (~ 1 μm) but also shorter wavelengths, including those in the visible part of the spectrum.