Optical Pyrometer Working Principle – Any metallic surface when heated emits radiation of different wavelengths which are not visible at low temperature but at about 550 °C, radiations in shorter wavelength are visible to eye and from the colour approximate temperature is measured. The approximate values of temperature for colour (colour scale) is given in Table 13.4.

Within a visible range, a given wavelength has a fixed colour and the energy of radiation is interpreted as Intensity or Brightness. Hence if we measure the brightness of the light of a given colour emitted by a hot source, we have an indication of temperature. This is the principle of optical pyrometer.

In an optical pyrometer, the wavelength of radiation accepted is restricted by means of a colour filter and brightness is measured by comparison with a standard lamp.

The most common type of optical pyrometer working principle used is the disappearing fila­ment pyrometer. The schematic is shown in Fig.13.58. 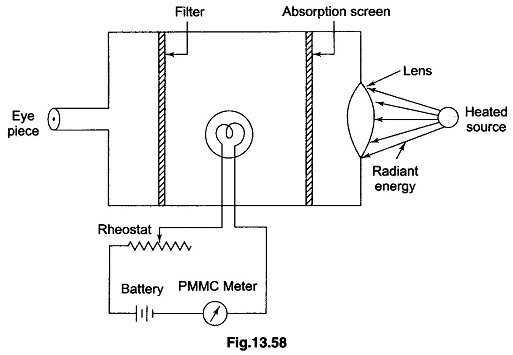 An image of the radiating source is produced by a lens and made to coincide with the filament of an electric lamp.

However, if the temperature of the filament is higher than that required for equality of brightness, filament becomes too bright as shown in Fig.13.57(b).

On the other hand if the temperature of filament is lower, the filament be­comes dark as shown in Fig.13.57(a).

The range of temperature, which can be measured by an instrument of this type depends on the maximum allowable temperature of the lamp which is around 1400 °C.

Optical Pyrometer working principle is widely used for accurate measurement of temperature of furnaces, molten metals and other heated materials.