When temperature being measured is very high and physical contact with the medium to be measured is impossible or impractical, optical pyrometer based on the principle of thermal radiation are used. These Types of Pyrometer Working Principle are used under condition where corrosive vapours or liquids would destroy thermocouples, resistance thermometer and thermister, if made to come in contact with the measured medium.

Radiation Pyrometer Working Principle measures the radiant (energy) heat emitted or reflected by a hot object. Thermal radiation is an electro magnetic radiation emitted as a result of temperature and lies in the wavelength of 0.1 – 100 μm.

Therefore, the heat received by the detector is proportional to the fourth power of the absolute temperature of the hot body.

Radiation Pyrometer are of two types. 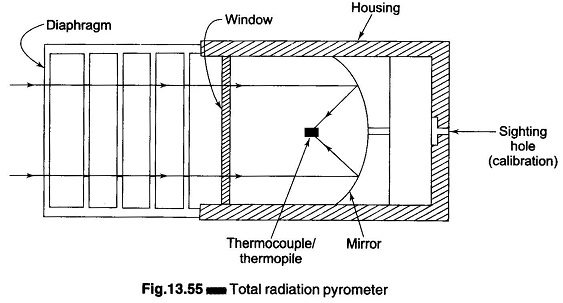 In this Types of Pyrometer, a diaphragm unit along with a mirror is used to focus the radiation on a radiant energy sensing transducers. The lens (mirror) to the transducer distance is adjusted for proper focus. The mirror arrangement has an advantage that since there is no lens, both absorption and reflection are absent.

Presence of any absorbing media between the target and the transducers, reduces the radiation received and the pyrometer reads low.

The output from a total radiation pyrometers whether amplified or not, is usually taken to a PMMC instrument or to a self-balancing potentiometer. The output may be fed to a recorder or controller.

Infrared Pyrometer Working Principle are partial or selective radiation pyrometers. Above temperatures of 550 °C, a surface starts to radiate visible light energy and simultaneously there is a proportional increase in the infrared energy.

Infrared principles using thermocouples, thermopile and bolometers are used. Also various types of photo-electric transducers are most commonly used for infrared transducers. The most useful transducers used for industrial application are the Photo-voltaic cells. These cells used in radiation pyrometers, respond to wavelength in infrared region and may be used to measure temperature down to 400 °C. 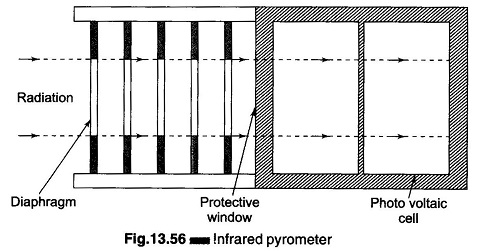 The infrared radiation is focused on a photo-voltaic cell as shown in Fig. 13.56. It is necessary to ensure that the cell does not become overheated. The core of radiation passing to the cell is defined by the area of the first diaphragm.

The protective window is made of thin glass and serves to protect the cell and filter from physical damage. The filter is used on the range of 1000 °C to 1200 °C in order to reduce the infrared radiation passed to the photo cell. This help in preventing the photo cell from being overheated.

All infrared systems depend on the transmission of the infrared radiant energy being emitted by a heated body to a detector in the measuring system. The sensor head is focused on the object whose temperature is being measured and/or controlled.

The infrared energy falling on the detector either changes the detector resist­ance in proportion to the temperature as in the case of thermister or generates an emf in the detector such as a thermopile. The change in resistance or generated emf is then indicated on a meter.