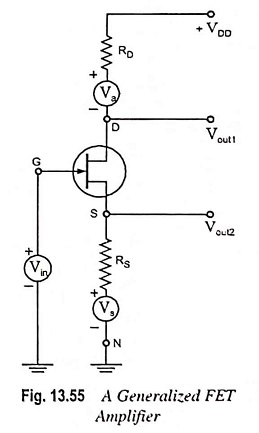 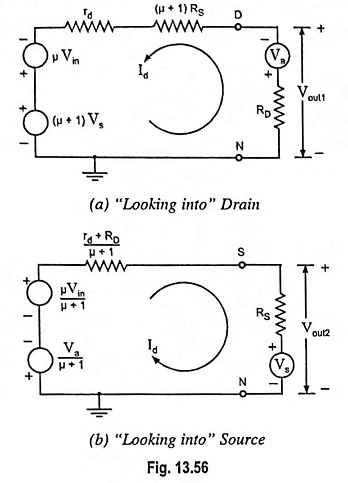 Thevenin’s equivalent circuit from drain to ground and from source to ground are given in Figs. 13.56 (a) and 13.56 (b) respectively. From the circuit given in Fig. 13.56 (a) it is concluded that “looking into the drain” of the FET it is seen (for small signal operation) an equivalent circuit consisting of two generators in series, one of -μ times the gate signal voltage Vin and the second (μ + 1) times the source-signal voltage Vs and the resistance rd+(μ + 1) RS. Note that the source-signal voltage Vs and the resistance in the source lead are both multiplied by the same factor, (μ + 1).

Resistance Rout, looking into the drain is increased by (μ + 1)RS from its value rd for RS = 0. The net output resistance R′out taking RD into account is given as

It is observed that with the addition of RS, voltage gain is reduced while the output impedance is increased. The input impedance is extremely high (100 MΩ or so) since gate junction is reverse biased.

Since Av is positive, there is no shift between input and output. Also since gm ≫ gd, the magnitude of amplification is approximately the same as for the common source amplifier circuit with RS ≠ 0.

The input impedance Zin, between source and ground is obtained from seeing Fig. 13.56 (b)

Output From Source: From Fig. 13.56 (b) it is concluded that “looking into the source” of the FET it is seen (for small-signal operation) an equivalent circuit consisting of two generators in series, one of value µ/(µ + 1) times the gate-signal voltage vin and the second 1/μ + 1 times the drain-signal voltage va and a resistance rd + RD/μ + 1.

The output impedance Zout of the source follower at low frequencies (with RD = 0 and with RS considered external to the amplifier) is, from Fig. 13.56 (b),