For describing the output of pulse generators and the applications in which they are used, the introduction of terminology associated with the pulses is very important. The first group of such terms denotes the pulse characteristics of ideal rectangular pulses whereas the second group provides measures of the deviation from the shape and periodicity of ideal pulses.

However, real pulses and pulse trains only approximate the pulse characteristics of their ideal counterparts. So some additional terms are used for describing the non-ideal aspects of real pulses. These terms along with their definitions are given below and illustrated in Fig. 28.3. 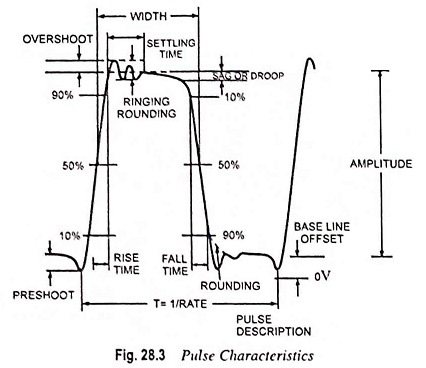 The baseline is referred to the dc level and is the line at which the pulse starts and ends. The shift of this line from zero volt, or the expected value is called the baseline offset.