Pulse modulation may be used to transmit analog information, such as continuous speech or data. It is a system in which continuous waveforms are sampled at regular intervals.

Pulse modulation may be broadly subdivided into two categories, analog and digital. In the former, the indication of the sample amplitude may be infinitely variable, while in the latter a code which indicates the sample amplitude to the nearest predetermined level is sent. 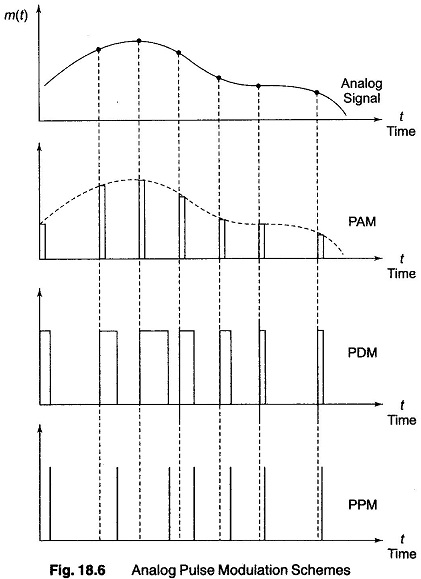 In PDM, the pulse width is proportional to the amplitude of the modulating signal.

In PPM, the pulse delay from some reference point is proportional to the amplitude of the modulating signal.

In both PDM and PPM information is conveyed by a time parameter, or the location of the pulse edges. Thus, these modulation types are referred to as pulse time. In PAM and PDM, the sample value equals zero, usually represented by a non-zero amplitude or duration in order to prevent missing pulses and to preserve a constant pulse rate. This is important for synchronization purposes when time division multiplexing is used.