Frequency Modulation and Phase Modulation is a system in which the amplitude of the modulated carrier is kept constant, while its frequency and rate of change are varied by the modulating signal. The first practical system was put forward in 1936 as an alternative to AM in an effort to make radio transmissions more resistant to noise. Phase modulation is a similar system in which the phase of the carrier is varied instead of its frequency; as in FM, the amplitude of the carrier remains constant.

If the modulating signal (AF) is 15 kHz at a certain amplitude and the carrier shift (because of the modulating voltage) is 75 kHz, the transmitter will produce eight significant sidebands (see Table 5-1). This is known as the maximum deviation ratio: 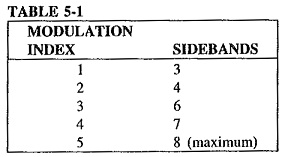 Both these terms are important because of the bandwidth limitations placed on wideband FM transmitting stations by the regulating agencies throughout the world.

The general equation of an unmodulated wave, or carrier, may be written as

Note that ωt represents an angle in radians.

If any one of these three parameters is varied in accordance with another signal, normally of a lower frequency, then the second signal is called the modulation, and the first is said to be modulated by the second. Amplitude modulation, already discussed, is achieved when the amplitude A is varied. Alteration of the phase angle Φ, will yield phase modulation. If the frequency of the carrier is made to vary, frequency-modulated waves are obtained.

It is assumed that the modulating signal is sinusoidal. This signal has two important parameters which must be represented by the modulation process without distortion, specifically, its amplitude and frequency. It is understood that the phase relations of a complex modulation signal will be preserved. By the definition of frequency modulation, the amount by which the carrier frequency is varied from its unmodulated value, called the deviation, is made proportional to the instantaneous amplitude of the modulating voltage. The rate at which this frequency variation changes or takes place is equal to the modulating frequency. 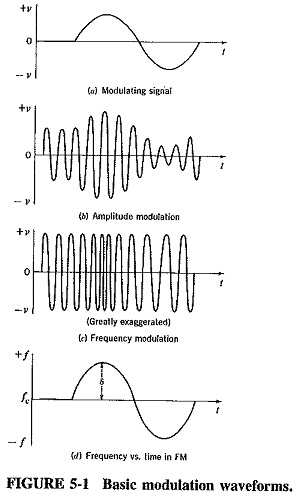 The situation is illustrated in Figure 5-1, which shows the modulating voltage and the resulting frequency-modulated wave. Figure 5-1 also shows the frequency variation with time, which can be seen to be identical to the variation with time of the modulating voltage. The result of using that modulating voltage to produce AM is also shown for comparison. As in FM, all signals having the same amplitude will deviate the carrier frequency by the same amount, for example, 45 kHz, no matter what their frequencies. All signals of the same frequency, for example, 2 kHz, will deviate the carrier at the same rate of 2000 times per second, no matter what their individual amplitudes. The amplitude of the frequency-modulated wave remains constant at all times. This is the greatest single advantage of FM.

From Figure 5-1d, it is seen that the instantaneous frequency f of the frequency-modulated wave is given by

The maximum deviation for this particular signal will occur when the cosine term has its maximum value, ±1. Under these conditions, the instantaneous frequency will be

maximum deviation δ will be given by

where F (ωc,ωm) is some function of the carrier and modulating frequencies. This function represents an angle and will be called θ for convenience. The problem now is to determine the instantaneous value (i.e., formula) for this angle. 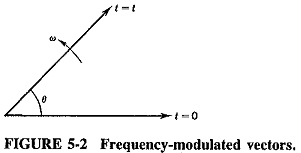 As Figure 5-2 shows, θ is the angle traced out by the vector A in time t. If A were rotating with a constant angular velocity, for example, ρ, this angle θ would be given by ρt (in radians). In this instance the angular velocity is anything but constant. It is governed by the formula for ω obtained from Equation (5-2), that is, ω = ωc (1 + kVm cos ωmt). In order to find θ, ω must be integrated with respect to time. Thus

The derivation utilized, in turn, the fact that ωc is constant, the formula ∫ cos nx dx = (sin nx)/n and Equation (5-4), which had shown that kVmfc = δ. Equation (5-6) may now be substituted into Equation (5-5) to give the instantaneous value of the FM voltage; therefore

The modulation index for FM, mf, is defined as

Frequency Spectrum of the FM Wave:

When a comparable stage was reached with AM theory, i.e., when Equation (3-7) had been derived, it was possible to tell at a glance what frequencies were present in the modulated wave. Unfortunately, the situation is far more complex, mathematically speaking, for FM. Since Equation (5-9) is the sine of a sine, the only solution involves the use of Bessel functions. Using these, it may then be shown that Equation (5-9) may be expanded to yield

It can be shown that the output consists of a carrier and an apparently infinite number of pairs of sidebands, each preceded by J coefficients. These are Bessel func­tions. Here they happen to be of the first kind and of the order denoted by the subscript, with the argument mf, Jn(mf) may be shown to be a solution of an equation of the form

This solution, i.e., the formula for the Bessel function, is

In order to evaluate the value of a given pair of sidebands or t le value of the carrier, it is necessary to know the value of the corresponding Bessel function. Separate calculation from Equation (5-12) for each case is not required since information of this type is freely available in table form, as in Table 5-2, or graphical form, as in Figure 5-3. 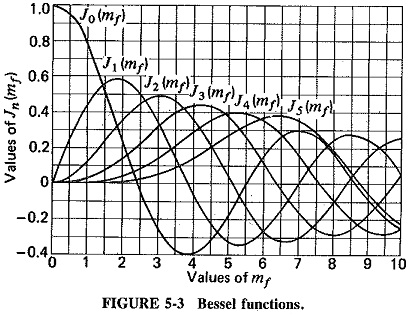 Observations: The mathematics of the previous discussion may be reviewed in a series of observations as follows:

Bandwidth and required spectra: Using Table 5-2, it is possible to evaluate the size of the carrier and each sideband for each specific or value of the modulation index. When this is done, the frequency spectrum of the FM wave for that particular value of mf may be plotted. This is done in Figure 5-4, which shows these spectrograms first for increasing deviation (fm constant), and then for decreasing modulating frequency (δ constant). Both the table and the spectrograms illustrate the observations, especially points 2, 3, 4, and 5. It can be seen that as modulation depth increases, so does bandwidth (Figure 5-4a), and also that reduction in modulation frequency increases the number of sidebands, though not necessarily the bandwidth (Figure 5-4b). Another point shown very clearly is that although the number of sideband components is theoretically infinite, in practice a lot of the higher sidebands have insignificant relative amplitudes, and this is why they are not shown in the spectrograms. Their exclusion in a practical system will not distort the modulated wave unduly.

In order to calculate the required bandwidth accurately, the student need only look at the table to see which is the last J coefficient shown for that value of modulation index. 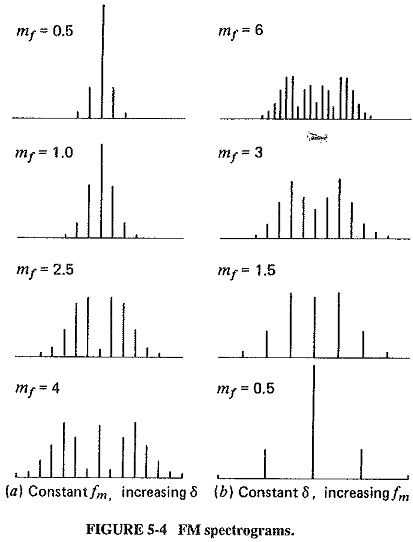 A rule of thumb (Carson’s rule) states that (as a good approximation) the bandwidth required to pass an FM wave is twice the sum of the deviation and the highest modulating frequency, but it must be remembered that this is only an approximation. Actually, it does give a fairly accurate result if the modulation index is in excess of about 6.

If the phase Φ, in the equation ν = A sin (ωct + Φ) is varied so that its magnitude is proportional to the instantaneous amplitude of the modulating voltage, the resulting wave is phase-modulated. The expression for a PM wave is

where Φm is the maximum value of phase change introduced by this particular modulating signal and is proportional to the maximum amplitude of this modulation. For the sake of uniformity, this is rewritten as

To visualize phase modulation, consider a horizontal metronome or pendulum placed on a rotating record turntable. As well as rotating, the arm of this metronome is swinging sinusoidally back and forth about its mean point. If the maximum displacement of this swing can be made proportional to the size of the “push” applied to the metronome, and if the frequency of swing can be made equal to the number of “pushes” per second, then the motion of the arm is exactly the same as that of a phase-modulated vector. Actually, PM seems easier to visualize than FM.

Equation (5-13) was obtained directly, without recourse to the derivation required for the corresponding expression for FM, Equation (5-9). This occurs because in FM an equation for the angular velocity was postulated, from which the phase angle for ν = A sin (θ) had to be derived, whereas in PM the phase relationship is defined and may be substituted directly. Comparison of Equations (5-14) and (5-9) shows them to be identical, except for the different definitions of the modulation index. It is obvious that these two forms of angle modulation are indeed similar. They will now be compared and contrasted.

In phase modulation, the phase deviation is proportional to the amplitude of the modulating signal and therefore independent of its frequency. Also, since the phase modulated vector sometimes leads and sometimes lags the reference carrier vector, its instantaneous angular velocity must be continually changing between the limits imposed by Φm;v thus some form of frequency change must be taking place. In frequency modulation, the frequency deviation is proportional to the amplitude of the modulating voltage. Also, if we take a reference vector, rotating with a constant angular velocity which corresponds to the carrier frequency, then the FM vector will have a phase lead or lag with respect to the reference, since its frequency oscillates between fc – δ and fc + δ. Therefore FM must be a form of PM. With this close similarity of the two forms of angle modulation established, it now remains to explain the difference.

The practical effect of all these considerations is that if an FM transmission were received on a PM receiver, the bass frequencies would have considerably more deviation (of phase) than a PM transmitter would have given them. Since the output of a PM receiver would be proportional to phase deviation (or modulation index), the signal would appear unduly bass-boosted. Phase modulation received by an FM system would appear to be lacking in bass. This deficiency could be corrected by bass boosting the modulating signal prior to phase modulation. This is the practical difference between phase and frequency modulation.

The following are the most important ones:

The advantages are not all one-sided, or there would be no AM transmissions left. The following are some of the disadvantages of FM: