Streamer Theory of Breakdown in Gases:

Townsend mechanism when applied to breakdown at atmospheric pressure was found to have certain drawbacks. Firstly, according to the Townsend theory, current growth occurs as a result of ionization processes only. But in practice, breakdown voltages were found to depend on the gas pressure and the geometry of the gap. Secondly, the mechanism predicts time lags of the order of 10-5 s, while in actual practice breakdown was observed to occur at very short times of the order of 10-8 s. Also, while the Townsend mechanism predicts a very diffused form of discharge, in actual practice, discharges were found to be filamentary and irregular. The Townsend mechanism failed to explain all these observed phenomena and as a result, around 1940, Raether and, Meek and Loeb independently proposed the Streamer Theory of Breakdown in Gases.

In practice, discharges were found to be filamentary and irregular. The Townsend Mechanism failed to explain all the above phenomena and therefore around 1940, Raether and Meek and Loeb independently proposed the Streamer Theory of Breakdown in Gases.

The growth of charge carriers in an avalanche in a uniform field is described by eαd. This is valid only as long as the influence of the space charge due to ions is very small compared to the applied field. In his studies on the effect of space charge on avalanche growth, Raether observed that when charge concentration was between 106 and 108, the growth of the avalanche became weak. 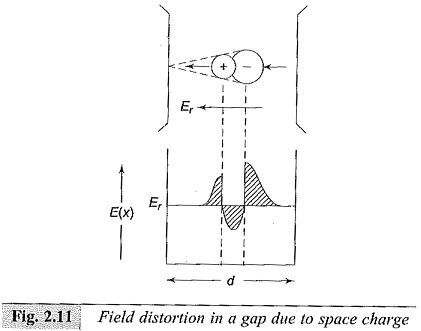 For simplicity, the space charge at the head of the avalanche is assumed to have a spherical volume containing negative charge at its top because of the higher electron mobility. Under these conditions, the field gets enhanced at the top of the avalanche with field lines from the anodes terminating on its head. Further, at the bottom of the avalanche, the field between electrons and ions reduces the applied field (E). Still further down the field between cathode and the positive ions gets enhanced. Thus, the field distortion occurs and it becomes noticeable with a charge carrier number n < 106. For example, in nitrogen at p = 760 torr and with a gap distance of 2 cms, the filled field distortion will be about 1%. This 1% field distortion over the entire gap will lead to a doubling of the  avalanche size, but as the distortion is significant only in the vicinity of the top of the avalanche its effect is still negligible.

However, if a charge density in the avalanche approaches n = 108 the space charge filled field and the applied field will have the same magnitude and this leads to the initiation of a Streamer Theory of Breakdown in Gases. Thus, the space charge fields play an important role in the growth of avalanches in corona and spark discharges in non­uniform field gaps. It has been shown that transformation from an avalanche to a streamer generally occurs when the charge within the avalanche head reaches a critical value of n0 exp (αxc) = 108 or αxc lies between 18 and 20, where xc is the length of the avalanche in which the secondary electrons are produced by photo-ionization of gas molecules in the inter-electrode gap.

Further, cloud chamber photographs of the avalanche development have shown that, under certain conditions, the space charge developed in an avalanche can transform the avalanche into streamers which lead to very rapid development of breakdown.

In the theories proposed by Raether and Meek it has been shown that when the avalanche’in the gap reaches a critical size, the combined applied field and the space charge field cause intense ionization and excitation of the gas particles in front of the avalanche. Instantaneous recombination between positive ions and electrons releases photons which in turn produce secondary electrons by photo-ionization. These secondary electrons under the influence of the field in the gap develop into secondary avalanches as shown in Fig. 2.12. Since photons travel with the velocity of light, the photo-ionization process gives rise to rapid development of conduction channels across the gap. 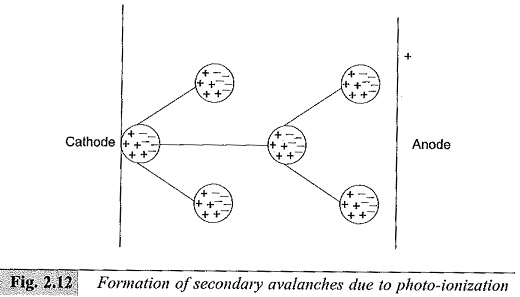 where Er is the space charged field directed radially at the head of the avalanche and E is the applied field.

The conditions for the transition from the avalanche to streamer assumes that the space charged field, E, approaches the externally applied field (E = Er) and hence the breakdown criterion (Eq. (2.28)) becomes

The minimum breakdown value for a uniform field gap by Streamer Theory of Breakdown in Gases mechanism is then obtained on the assumption that the transition from an avalanche to a streamer occurs when the avalanche has just crossed a gap, d. Thus, a minimum breakdown voltage by streamer mechanism occurs only when a critical length xc = d.

Meek proposed a simple quantitative criterion to estimate the electric field that transforms an avalanche into a streamer. The field Er produced by the space charge, at the radius r, is given by

where α is Townsend’s first ionization coefficient, p is the gas pressure in torr, and x is the distance to which the Streamer Theory of Breakdown in Gases has extended in the gap. According to Meek, the minimum breakdown voltage is obtained when Er = E and x =d in the above equation.

The equation simplifies into,

This equation is solved between α/p and E/p at which a given p and d satisfy the equation. The breakdown voltage is given by the corresponding product of E and d.

The above simple criterion enabled an agreement between the calculated and the measured breakdown voltages. This theory also neatly fits in with the observed filamentary, crooked channels and the branching of the spark channels, and cleared up many ambiguities of the Townsend mechanism when applied to breakdown in a high pressure gas across a long gap.

It is still controversial as to which mechanism operates in uniform field conditions over a given range of pd values. It is generally assumed that for pd values below 1000 torr-cm and gas pressures varying from 0.01 to 300 torr, the Townsend mechanism operates, while at higher pressures and pd values the Streamer Theory of Breakdown in Gases mechanism plays the dominant role in explaining the breakdown phenomena.