When voltages are applied only for short durations of the order of 10-8 s the dielectric strength of a solid dielectric increases very rapidly to an upper limit called the intrinsic electric strength. Experimentally, this highest dielectric strength can be obtained only under the best experimental conditions when all extraneous influences have been isolated and the value depends, only on the structure of the material and the temperature. The maximum electrical strength recorded is 15 MV/cm for polyvinyl-alcohol at – 196°C. The maximum strength usually obtainable ranges from 5 MV/cm to 10 MV/cm. Intrinsic breakdown depends upon the presence of free electrons which are capable of migration through the lattice of the dielectric.

Usually, a small number of conduction electrons are present in solid dielectrics, along with some structural imperfections and small amounts of impurities. The impurity atoms, or molecules or both act as traps for the conduction electrons up to certain ranges of electric fields and temperatures. When these ranges are exceeded, additional electrons in addition to trapped electrons are released, and these electrons participate in the conduction process. Based on this principle, two types of intrinsic breakdown mechanisms have been proposed.

As mentioned earlier, intrinsic breakdown occurs in time of the order of 10-8s and therefore is assumed to be electronic in nature. The initial density of conduction (free) electrons is also assumed to be large, and electron-electron collisions occur. When an electric field is applied, electrons gain energy from the electric field and cross the forbidden energy gap from the valency to the conduction band. When this process is repeated, more and more electrons become available in the conduction band, eventually leading to breakdown.

This is similar to breakdown in gases due to cumulative ionization. Conduction electrons gain sufficient energy above a certain critical electric field and cause liberation of electrons from the lattice atoms by collisions. Under uniform field conditions, if the electrodes are embedded in the specimen, breakdown will occur when an electron avalanche bridges the electrode gap.

An electron within the dielectric, starting from the cathode will drift towards the anode and during this motion gains energy from the field and loses it during When the energy gained by an electron exceeds the lattice ionization potential, an additional electron will be liberated due to collision of the first electron. This process repeats itself resulting in the formation of an electron avalanche. Breakdown will occur, when the avalanche exceeds a certain critical size. 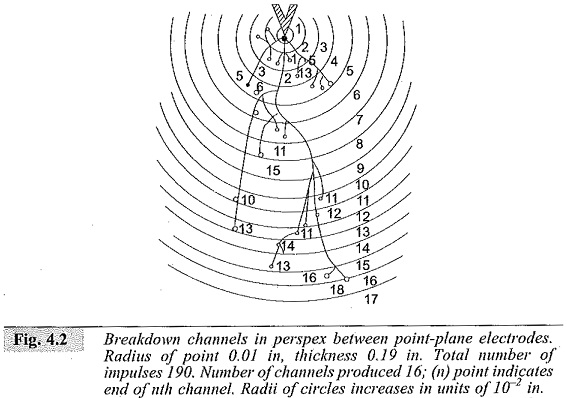 In practice, breakdown does not occur by the formation of a single avalanche itself, but occurs as a result of many avalanches formed within the dielectric and extending step by step through the entire thickness of the material as shown in Fig. 4.2. This can be readily demonstrated in a laboratory by applying an impulse voltage between point-plane electrodes with point embedded in a transparent solid dielectric such as perspex.