Conduction and Breakdown in Pure Liquids:

When low electric fields less than 1 kV/cm are applied, conductivities of 10-18-10-20 mho/cm are obtained. Conduction and Breakdown in Pure Liquids are probably due to the impurities remaining after purification. However, when the fields are high (> 100 kV/cm) the currents not only increase rapidly, but also undergo violent fluctuations which will die down after some time. A typical mean value of the conduction current in hexane is shown in Fig. 3.2. 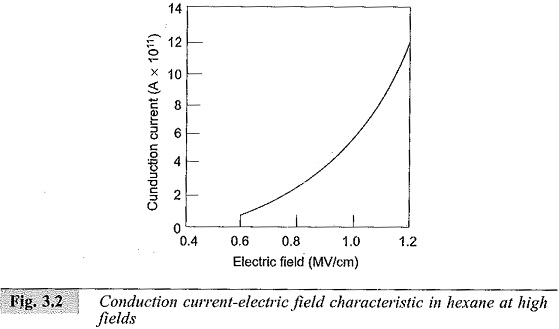 This is the condition nearer to breakdown. However, if this figure is redrawn starting from very small currents, a current-electric field characteristic as shown in Fig. 3.3, can be obtained. This curve will have three distinct regions as shown.

At very low fields the current is due to the dissociation of ions. With intermediate fields the current reaches a saturation value, and at high fields the current generated because of the field-aided electron emission from the cathode gets multiplied in the liquid medium by a Townsend type of mechanism. The current multiplication also occurs from the electrons generated at the interfaces of liquid and impurities. The increase in current by these processes continues till breakdown occurs.

The exact mechanism of current growth is not known; however; it appears that the electrons are generated from the cathode by field emission of electrons. The electrons so liberated get multiplied by a process similar to Townsend’s primary and secondary ionization in gases. As the breakdown field is approached, the current increases rapidly due to a process similar to the primary ionization process and also the positive ions reaching the cathode generate secondary electrons, leading to breakdown.

It has been observed that the increase in breakdown strength is more, if the dissolved gases are electronegative in character (like oxygen).

Similarly, the increase in the liquid hydrostatic pressure increases the breakdown strength. These properties are shown in Figs 3.4 and 3.5. 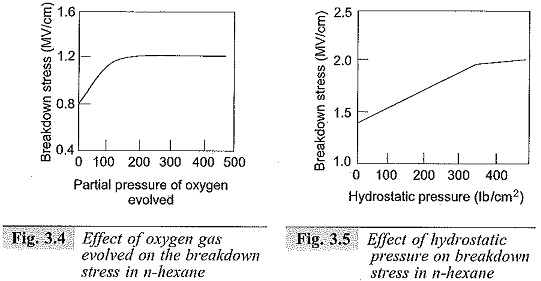 To sum up, this type of breakdown process in pure liquids, called the electronic breakdown, involves emission of electrons at fields greater than 100 kV/cm. This emission occurs either at the electrode surface irregularities or at the interfaces of impurities and the liquid. These electrons get further multiplied by Townsend’s type of primary and secondary ionization processes, leading to breakdown.