An emitter coupled clipper using two transistors is shown in Fig. 30.71. It is a two level clipper in which the input is applied to the base of one of the transistors and the base of the other transistor is kept at a fixed voltage. 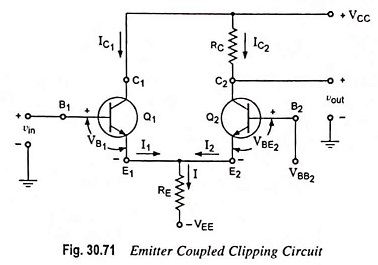 Consider initially that input voltage vin is negative enough to ensure that transistor Q1 is in cutoff. In this condition only transistor Q2 carries current. Let us also consider that VBB2 has been adjusted so that transistor Q2 is in its active region and current in the emitter resistance RE remains constant. This will be valid only if

The total range Δvout over which the output can follow the input is IRE and is, therefore, adjustable through the adjustment of current I. 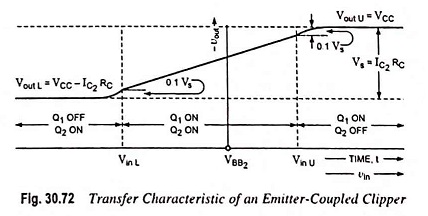 The absolute voltage of the portion of the input waveform selected for transmission may be selected through an adjustment of a biasing voltage on which vin is superimposed or through an adjustment of VBB2. The total range of input voltage Δvin between clipping limits is Δvout/A, where A is the gain of the amplifier stage. The transfer characteristic of an emitter coupled clipper is given in Fig. 30.72.