The constriction of a gas-filled diode or phanotron is similar to a vacuum diode except that the size of its electrodes is larger so as to conduct heavy currents. As far as the symbolic representation of the gas-filled tubes is concerned, they are usually represented by a dot in the circle with other elements of the tubes e.g. a di­ode, as shown in Fig. 5.27. The gas-filled diode essentially consists of an oxide coated thermionic cathode with a graphite or metal plate en­closed in a glass bulb. After complete evacuation of the tube, a drop of liquid of mercury is introduced and the tube is sealed off so that the bulb is filled with mercury vapours during operation. 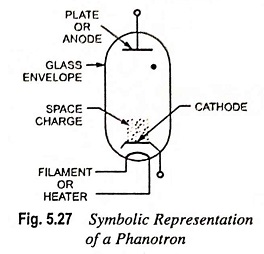 Gas-filled diodes are widely used for rectification of alternating currents where the currents required are 30 A or less at low voltages. As such it is used for charging storage batteries and other similar applications. The gas-filled diode cannot be satisfactorily used at high voltages or high frequencies because the gas-filled tube does not have the property of offering a very high impedance to the flow of current through it, when the plate is negative. The time required for ionization and deionization of the gas prevents the use of gas-filled tubes on frequencies above a few hundred Hz.

The circuit diagram for determining plate characteristics of a phanotron is shown in Fig. 5.28. The series resistance R is used to limit the current to reach a dangerously high value. The plate is held at positive potential and cathode at negative potential. When cathode is heated a large number of electrons are emitted. As the plate voltage of a gas-filled diode (or phanotron) is gradually increased from zero, the tube remains non-conducting until a certain critical plate voltage, called the ionizing or striking voltage reaches. Before reaching plate voltage to critical value, the gas is not ionized and the tube conducts very small current and behaves like a vacuum diode. As the plate attains critical voltage, which is usually 15 V, the gas gets ionized and plate current immediately attains its full value determined by the circuit impedance. The tube is then said to be fired or ignited. Now further increase in plate voltage will cause increase in current resulting in larger voltage drop across the load, the voltage drop across the tube remaining the same, about 15 V. Phanotron has higher efficiency and better regulation than that of a vacuum diode. It is because of low voltage drop across the tube. 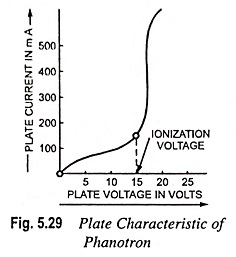 The plate characteristic of a gas-filled diode is shown in Fig. 5.29. Initially with the increase in plate voltage the plate current rises slowly. But at ionization potential, the plate current rises sharply. However, drop across the tube remains constant. The extra voltage is dropped across the external series resistance R. Any attempt to increase plate voltage above ionizing value is of no use.