What is MOSFET Handling?

What is MOSFET Handling? – MOSFET requires very careful handling particularly when out of circuit. In circuit, a MOSFET is as rugged as any other solid-state device of similar construction and size.

MOSFET has an ultra thin silicon dioxide layer between the channel and the gate. Because the insulating layer is so thin, it is easily destroyed by excessive gate source voltage VGS. On application of large gate voltage, an open-circuit gate may accumulate enough charge so as to develop an electric field large enough to puncture the thin SiO2 layer.

Aside due to direct application of an excessive gate-to-source voltage VGS, the thin SiO2 layer may get destroyed in more subtle ways. If a MOSFET is inserted or removed from a circuit while the power is ON, transient voltages caused by inductive kickback and other effects may exceed VGS (max) rating. This will wipe out the MOSFET. Even picking up a MOSFET may deposit enough static charge to exceed the VGS (max) rating. Generally, grounding rings are used to short all leads of a MOSFET for avoiding any voltage build up between gate and source. These grounding or shorting rings are removed only after the MOSFET is connected in the circuit. Sometimes, conducting foam is applied between the leads instead of using shorting or grounding rings. 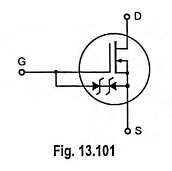 Some MOSFETs are protected by built-in zener diodes in parallel with the gate and source, as shown in Fig. 13.101. With normal operating voltages, the ze­ner diode remains open and does not in­fluence the working of the circuit. In case of an extremely high VGS, the zener di­ode breaks down thereby limiting the gate potential to a value equal to the zener diode breakdown voltage, much smaller than VGS (max) rating. The disadvantage of these internal zener diodes is that MOSFET’s high input impedance is reduced. The trade-off is worth it in some applications because expensive MOSFETs get easily destroyed without zener protec­tion.

Caution : MOSFETs are delicate devices and can get easily destroyed. So they are to be handled carefully. Furthermore, they should never be connected or disconnected while the power is ON. Finally, before picking up a MOSFET device, get your body grounded by touching the chasis of the equipment you are working on.