A class A power amplifiers is defined as a power amplifier in which output current flows for the entire cycle (360°) of the input signal, as illustrated in Fig. 17.4. In other words, the transistor remains forward biased throughout the input cycle.

A schematic circuit of a series fed class A large signal amplifier using resistive load RC is shown in Fig. 17.5. The term “series fed” is derived from the fact that the load RC is connected in series with the transistor output. The only difference between this circuit and the small signal amplifier circuits considered previously is that the signals handled by the large signal circuit are in the range of volts and the transistor used is a power transistor capable of operating in the range of few watts. This circuit is seldom used for power amplification because of its poor collector efficiency but will provide clear understanding of class A operation to the readers. The output characteristics with operating point Q are shown in Fig. 17.6. ICQ and VCEQ represent no signal collector current and collector-emitter voltage respectively. 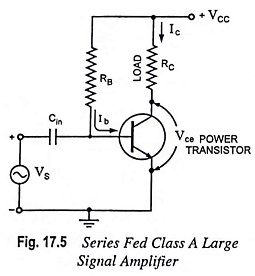 When an input ac signal is applied to the amplifier given in Fig. 17.5, the output will vary from its dc bias operating voltage and current. A small input signal, as indicated in Fig. 17.6. will cause the base current to vary above and below the dc bias point, which will then cause the collector current (output) Ic to vary from the dc bias point set as well as the collector-emitter voltage Vce to vary around its dc bias value. With the strengthening of the input signal, the output will vary further around the established dc bias point until either the current or voltage attains a limiting condition. For the current this limiting condition is either zero current at the lower end or VCC/RC at the upper end. For the collector-emitter voltage this limit is either 0 V or the supply voltage VCC. Let the output current vary between limits Ic min and Ic max and similarly the collector-emitter voltage between limits Vce min  and Vce max. 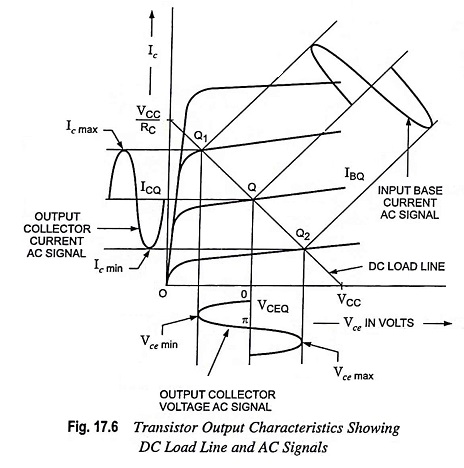 (i) Power dissipated in collector load as heat,

(ii) Power supplied to the transistor,

Power supplied to the transistor, Ptr (dc) is further subdivided into

Consider an N-P-N transistor: The potential difference across the depletion layer formed near the collector junction is called the barrier potential. This potential provides the P-region (base) slightly more energy than N-region (collector). Thus when electrons emitted from emitter cross the base junction and enter the collector region, they give up energy in the form of heat and it is this energy that the transistor has to dissipate to the surrounding.

Power flow diagram of a transistor is given below :

The collector efficiency of a transistor is given as

A measure of the ability of an active device to convert the dc power of supply into the ac (signal) power delivered to the load is called the power or conversion or theoretical efficiency. By definition the efficiency is

If the operating point Q is set at the midpoint of the maximum signal swing, the resulting maximum power condition may be achieved. 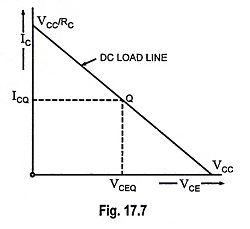 For the circuit shown in Fig. 17.7, this would be determined using

From Eq. (17.8 c) we have maximum ac power developed across the load resistor,

For the quiescent point Q,

Power supplied to the transistor,

Thus, we see that a class A power amplifiers with a direct coupled resistive load can supply only one-half the amount of ac power to the load that the transistor can dissipate and the dc power input is four times the amount of ac signal power in the load.

Class A power amplifiers have got advantages of simple construction and distortion less output voltage.

The drawbacks of class A power amplifiers are very low efficiency and large power dissipation in the power transistors.