The Motion in Combined Electric and Magnetic Fields is given by the below two names, namely 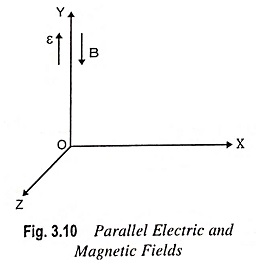 If the fields are chosen as illustrated in Fig. 3.10, the complete motion is given by

If, initially, a component of velocity vox perpendicular to the magnetic field exists, this component of velocity, together with the magnetic field, will result in circular motion, the radius of the circular path being independent of ε. However, electric field ε will cause change in velocity with time along the field. Thus, the resulting path will be helical with a pitch that changes with time. That is, the distance moved along the Y-axis per revolution increases with each revolution.

Perpendicular Electric and Magnetic Fields – An electron e is placed in the motion in combined electric and magnetic fields as shown in Fig. 3.11. 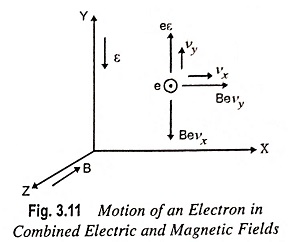 Assume that both e and B are perpendicular to each other. The initial velocity is zero, vx and vy are the velocities acquired by electron due to motion in combined electric and magnetic fields respectively.

According to Newton’s second law

where F1 and F2 are forces due to electric and magnetic fields respectively.

Substituting ε=V/d in above equation, we have

the above equation becomes 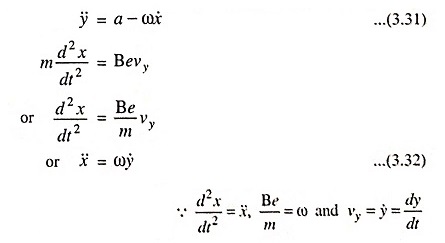 where C1 is a constant of integration

Solving the above second order differential equation, we have

Integrating above equation, we have

The above equation is cycloidal.