Bold face type is used wherever vector quantities (those having both magnitude and direction) are encountered.

In order to calculate the path of a Motion of Charged Particle in Electric Field, the force, given by Eq. (3.4), must be related to the mass and the acceleration of the particle by Newton’s second law of motion. Hence

The solution of above equation, subject to appropriate initial conditions, gives the path of the particle resulting from the action of the electric forces. If the magnitude of the charge on electron is e, the force on an electron in the field is

The minus sign denotes that the force is in the direction opposite the field. 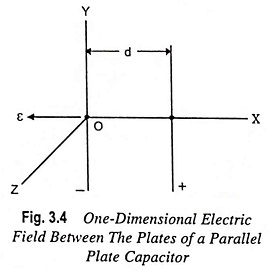 Thus, we have the motion of electron in X-direction with acceleration

Integrating above expression with respect to time, we have

The velocity can also be written as

Again integrating above expression with respect to time, we have

From initial conditions, when t = 0, x = 0, the electron being assumed to be at rest, therefore, K2 = 0 and the expression for displacement of electron is

The above equation is for displacement x of the electron in accelerating electric field ε at time t, with initial velocity and displacement being zero.

Transit Time, τ. Transit time is defined as the time taken by an electron to travel a given distance.

The kinetic energy (KE) possessed by the electron, when it reaches the other plate, at a distance d, under the influence of electric field ε is