Quantitative Theory of PN Junction Diode – Here an expression for the total current will be derived as a function of the applied voltage with the assumption that depletion layer thickness is negligible (i.e., barrier width is zero).

where pno is the hole concentration in thermal-equilibrium condition, Lh is the diffusion length for holes in N-type material and x is the distance from the junction where concentration is considered.

These several hole concentration components are shown in Fig. 7.13, which shows that the concentration pn(x) falls exponentially with distance x into the N-type material. 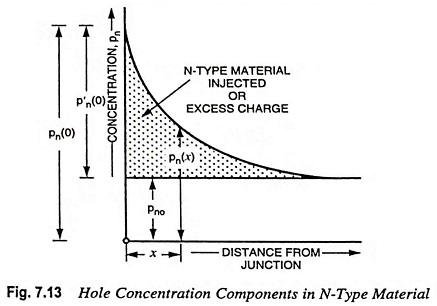 The diffusion hole current in the N-region is given as

where A is area of material in m2, Dh is diffusion constant for holes in m2/s, e is the magnitude of charge on holes, Lh is the diffusion length of holes in N-type material in metre, and p′n(0) is the excess of hole concentration at Quantitative Theory of PN Junction Diode.

Using Boltzmann relationship of kinetic theory of gases, we have

The diffusion length Lh and lifetime τh are related to each other as :

The total diode current I at x = 0 is given as

In the foregoing discussion a positive value of V indicates a forward bias. Equation (7.15) is equally valid for reverse bias [i.e., for negative values of applied voltage V]. For a reverse bias voltage exceeding VT (i.e., 26 mV) at room temperature (27 °C or 300 K), current I → – I0. Thus I0 is called the reverse saturation current.

The concentration of holes in N-type region,

The concentration of electrons in P-type region,

where ND and NA are the concentrations of donor and acceptor atoms respectively.

where VGO is a voltage numerically equal to the forbidden energy gap, EGO in electron volts, and VT is the volt equivalent of temperature and is equal to T/11,600.

For germanium the diffusion constants Dh and De vary approximately inversely proportional to temperature T. Hence I0 may be given as

where K1 is a constant, independent of temperature T.

In the discussion made above, the effect of carrier generation and recombination in the space-charge region has been ignored. Such an assumption is valid for a germanium diode (not for a silicon diode). For the silicon diode, a diffusion current is negligible in comparison with the transition-layer charge-generation current, which is given approximately by

where K2 is a constant, independent of temperature T.