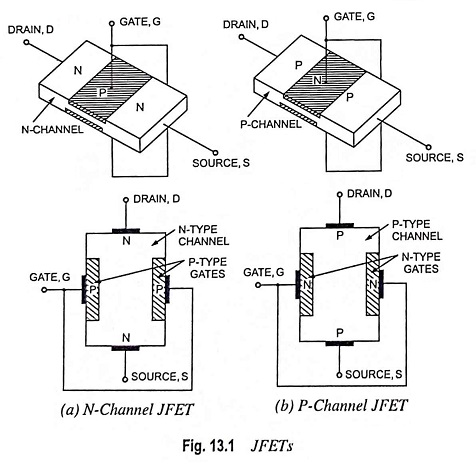 Its structure is quite simple. In an N-channel JFET an N-type silicon bar, referred to as the channel, has two smaller pieces of P-type silicon material diffused on the opposite sides of its middle part, forming P-N junctions, as illustrated in Fig. 13.1 (a). The two P-N junctions forming diodes or gates are connected internally and a common terminal, called the gate terminal, is brought out. Ohmic contacts (direct electrical connections) are made at the two ends of the channel—one lead is called the source terminal S and the other drain terminal D.

The silicon bar behaves like a resistor between its two terminals D and S. The gate terminal is analogous to the base of an ordinary transistor (BJT). It is used to control the flow of current from source to drain. Thus, source and drain terminals are analogous to emitter and collector terminals respectively of a BJT. 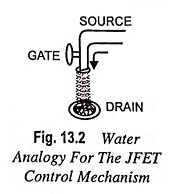 Analogies are seldom perfect and at times can be misleading, but the water analogy of Fig. 13.2 does provide a sense for the Junction Field Effect Transistor control at the gate terminal and the appropriateness of the terminology applied to the terminals of the device. The source of water pressure can be likened to the applied voltage from drain to source, which results in a flow of water (electrons) from the spigot (source). The “gate”, through an applied signal (potential) controls the flow of water (charge) to the “drain”, the drain and source terminals are at opposite ends of the N-channel as introduced in Fig. 13.1 because the terminology is defined for electron flow.

In Fig. 13.1 (a), the gate is P-region, while the source and the drain are N-regions. Because of this, a Junction Field Effect Transistor is similar to two diodes. The gate and the source form one of the diodes, and the gate and the drain form the other diode. These two diodes are usually referred to as the gate-source diode and the gate-drain diode. Since Junction Field Effect Transistor is a silicon device, it takes only 0.7 V for forward bias to provide significant current in either diode.

With the gate terminal not connected, and a potential applied (+ve at the drain and –ve at the source), a current called the drain current, ID flows through the channel located between the two P-regions. This current consists of only majority carriers – electrons in this case.

P-channel JFET is similar in construction to N-channel JFET except that P-type semiconductor material is sandwiched between two N-type junctions, as shown in Fig. 13.1 (b). In this case majority carriers are holes.

The basic structure of an N-channel JFET, together with the supply voltages, is shown in Fig. 13.3. 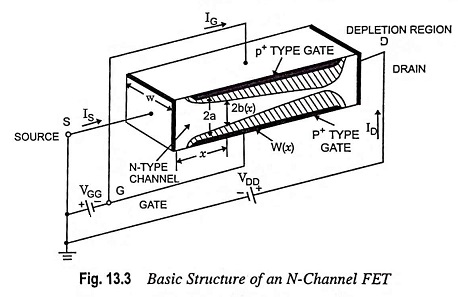 The noteworthy FET notations are as follows:

The schematic symbols for N-type and P-type JFETs are shown in Figs. 13.4 (a) and 13.4 (b) respectively. The vertical line in the symbol may be thought as channel and source S and drain D connected to the line. 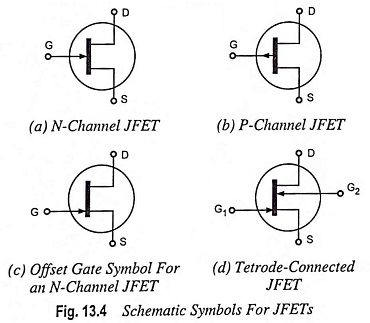 An alternative symbol for an N-channel JFET is shown in Fig. 13.4 (c). This symbol with its offset gate is preferred by many engineer and technicians. The offset gate points to the source end of the device, a definite advantage in complicated multistage circuit.

The symbol shown in Fig. 13.4 (d) is used where the terminals of the two gate regions are provided with separate connecting leads. In this case device is referred to as a tetrode-connected FET. 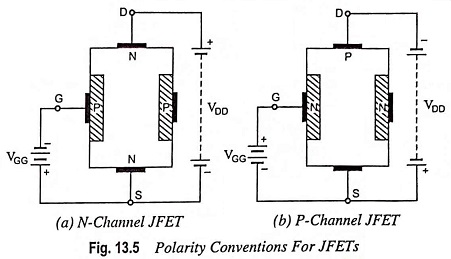 Other noteworthy points are as follows :

From the above statements it may be concluded that the action of a P-channel JFET is complementary, that is, all voltages and currents are reversed.

Let us consider an N-channel JFET for discussing its operation.

(i) When neither any bias is applied to the gate (i.e. when VGS = 0) nor any voltage to the drain w.r.t. source (i.e. when VDS = 0), the depletion regions around the P-N junctions are of equal thickness and symmetrical.

(ii) When positive voltage is applied to the drain terminal D w.r.t. source terminal S without connecting gate terminal G to supply, as illustrated in Fig. 13.6 (a), the electrons (which are the majority carriers) flow from terminal S to terminal D whereas conventional drain current ID flows through the channel from D to S. Due to flow of this current, there is a uniform voltage drop across the channel resistance as we move from terminal D to terminal S. This voltage drop reverse biases the diode. The gate is more negative with respect to those points in the channel which are nearer to D than to S. Hence, depletion layers penetrate more deeply into the channel at points lying closer to D than to S. Thus wedge-shaped depletion regions are formed, as shown in Fig. 13.6(a), when VDS is applied. The size of the depletion layer formed determines the width of the channel and hence the magnitude of current ID flowing through the channel.

To see how the width of the channel varies with the variation in gate voltage, let us consider the situation when the gate is biased negative with respect to the source while the drain is applied

with positive bias with respect to the source, as illustrated in Fig. 13.6 (b). Now the P-N junctions are reverse biased and depletion regions are formed. P-regions are heavily doped compared to the N-channel, so the depletion regions penetrate deeply into the channel. Since a depletion region is a region depleted of the charge carriers, it behaves as an insulator. The result is that the channel is narrowed, the resistance is increased and drain current ID is reduced. If the negative voltage at the gate is further increased, depletion layers meet at the centre and the drain current ID is cut off completely. On the other hand, if the negative bias to the gate is reduced, the width of the depletion layers gets reduced causing decrease in resistance and, therefore, increase in drain current ID. The gate-source voltage VGS at which drain current ID is cut off completely (pinched off), is called the pinch-off voltage VP. It is also to be noted that

The device is called the field-effect transistor (FET) because the drain current (output current) is controlled by the effect of the extension of the field associated with the depletion region developed by the reverse bias at the gate.

P-channel JFET operates in the same manner as an N-channel JFET except that channel current carriers will be the holes in place of electrons and the polarities of VGS and VDS are reversed.