What is Focusing Device in Cathode Ray Oscilloscope and why it is required?

Because of the mutual repulsion between the electrons, the convergent beam coming out from the accelerating anode has a tendency to spread from the axis. To avoid this and to bring the beam to a sharp focus at the screen, some Focusing Device in Cathode Ray Oscilloscope is required. The Focusing Device in Cathode Ray Oscilloscope may be either electrostatic or magnetic. Electrostatic focusing is used in a CRO whereas magnetic focusing is used in a TV picture tube.

An electrostatic focusing system is shown in Fig. 51.6. Electrostatic lens consists of three anodes, with the middle anode at a lower potential than the other two electrodes. 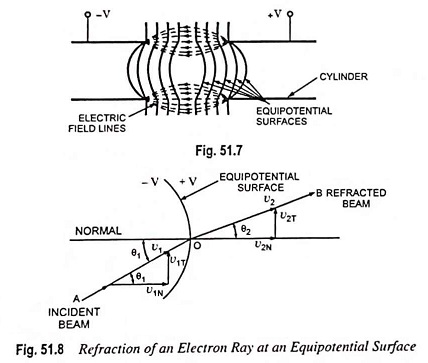 From the above expression it is obvious that equipotential surface acts as a concave lens in geometrical optics. That is why, this focusing system is named as an electrostatic lens.

Now if we go back and refer to Fig. 51.6, it can be seen that because of middle anode at a lower potential, electron beam coming from the cathode and passing through the first concave electrostatic lens tends to become more aligned with the axis of CRT and when it enters at the second concave electrostatic lens, formed between two anodes at different potentials, it is focused at the phosphor screen. Focal length of the electrostatic lens can be adjusted by varying potential of middle anode with respect to other two anodes. Thus the electron beam can be made to focus at the screen very precisely.

Electrostatic Deflection of Moving Electrons in CRO Tubes: We know that a force is experienced by an electron when it is kept in a uniform electric field. This principle is the basis for the deflection of electron beam owing to deflection plates. 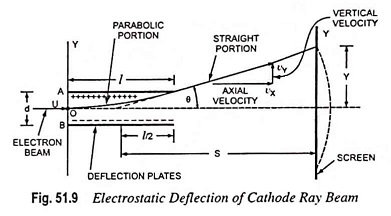 Let us consider an electron having initial velocity of u m/s along X-axis at point O in the space between the plates A and B, each of length l metres and separated by a distance of d metres. Let the pd across the plates be of V volts. For simplicity, let us assume that the field is uniform and does not extend beyond the ends of the plates.

Axial velocity of electron remains unchanged and is equal to u as there is no axial force and, therefore, no axial acceleration.

The period during which an electron remains in the region between the two plates is given by the expression.

The velocity of electron along Y-axis after time t is given by the expression.

After the electron leaves the region between the deflection plates, it travels in a straight line, because there is no field acting on it. A simple extension of this development will show that if this line is extended backward, it intercepts the X-axis at the centre of the plates i.e. at x = l/2 (approximately). Let S be distance along the X-axis from this point to the screen. Then the deflection y can be determined by similar triangles. Thus

If Va is the accelerating voltage and Vd is the deflecting voltage, then,

The deflection sensitivity of a cathode ray tube, which is defined as the vertical deflection of the beam on the screen per unit deflecting voltage, is given by the expression

The deflection factor, the reciprocal of deflection sensitivity, is given by the expression

Length of the trace obtained on the screen

The electromagnetic method of Focusing Device in Cathode Ray Oscilloscope is based on the fact that an electron which enters a constant magnetic field perpendicu­lar to its path is deflected and moves in a circular path. The mag­netic field produced is parallel to the axis of the tube. The electrons moving parallel to the axis are not affected by the magnetic field, while electrons having a component of velocity away from the axis move in a spiral path which finally brings them back to the axis.

The axis of the electromagnetic coil coincides with the elec­tron beam axis. The coil may extend the complete tube length or it may be concentrated in a smaller region. First type of coil is used in “image orthicon” camera tube in television, whereas the second type of coil is employed in picture tube of TV receiver, in radar indicator and in general purpose CRO. 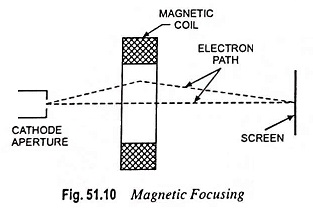 Electromagnetic Deflection of Cathode Ray Beam: Let us consider an electron having an initial velocity of u m/s along the tube axis OP at point O and assume that there is a uniform magnetic field of flux density B in Wb/m2 covering an axis distance l. 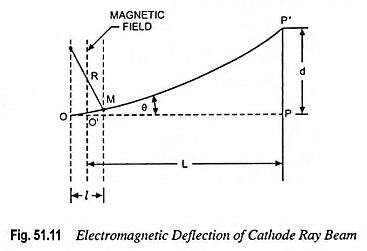 Then the force acting on the electron entering the field is eBu in a direction perpendicular to the path which is an arc of radius R given by R = mu/eB.

The electron emerges from the field and moves in a direction inclined at an angle θ to the axis and strikes the screen at P’. If the total angular deflection θ is very small, then

In most practical cases L is very much larger than l so that little error will be caused in assuming that the straight line MP’, if pro­jected backward, will pass through the centre O’ of the region of the magnetic field. Then

This equation is again approximate as it neglects the varia­tions of field at the edges.

The magnetic deflection sensitivity Sm, defined as the de­flection (in metre) on the screen caused by unit magnetic flux density, is given by

Alternatively, the sensitivity Sm is defined as the deflection, in mm, on the screen when 1 mA current flows through the deflection coil. This is expressed in mm/mA.