Controlled Transistor Series Regulator with Short Circuit Protection – If the load resistance RL is reduced or load terminals are shorted accidentally, a very large load current will flow in the circuit shown in Fig. 43.6. It may destroy the pass transistor Q1, diode or possibly some other component. Fuse protection will not prove adequate because the transistor may get damaged in a very small fraction of a second. 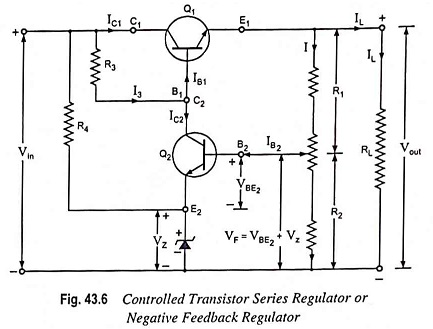 To avoid this situation, a current limiting circuit is added to a series regulator, as illustrated in Fig. 43.7. 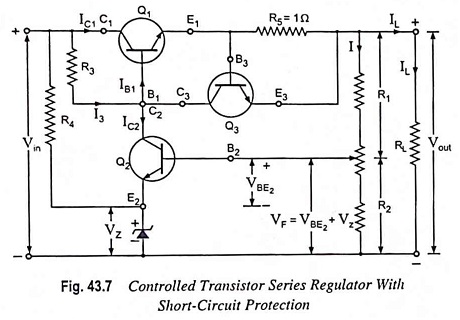 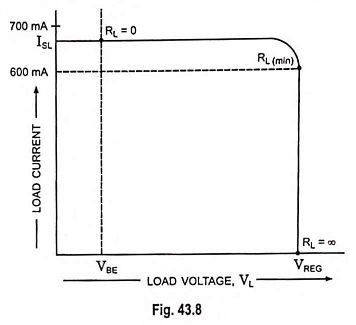 Figure 43.8 summarizes the current limiting. When load resistance RL is infinite, the output voltage is regulated and has a value of VREG. The load current IL is zero for this operating condition. When RL decreases, the load current IL increases up to the point where RL becomes equal to RL (min). At this minimum load resistance, IL equals 600 mA and VBE equals 0.6 V. Beyond this point, transistor Q3 turns on and the current limiting sets in. Further decrease in RL produces decrease in output voltage, and regulation is lost. When RL is zero, the load current IL is limited to a value between 600 mA and 700 mA. The load current with shorted load terminals is symbolized as ISL. When the load terminals are shorted in Fig. 43.7, the voltage across resistor R5 is

The exact value of RL (min) will be slightly less or greater than this.

where VBE is the base-emitter voltage of Q3, the current-limiting transistor.