Equivalent Circuit of Single Phase Induction Motor – The winding unbalance and the fact that both the main and auxiliary windings are fed by the same supply result in unbalanced main and auxiliary fields. The phasor along the winding axes can be split into symmetrical components F̅f and F̅b as given by Eqs (10.17a) and (10.17b). The forward component set F̅f and jF̅f produces a forward rotating field; similarly the backward component set F̅b and -jF̅b  results in a backward rotating field.

It is noted that no-load losses have been neglected and therefore the core-loss conductance has not been shown in both the circuits. The impedance seen by Emf, the forward field induced emf of the main winding, is

and the impedance seen by the Emb, backward field induced emf in the main winding, is

From Eqs (10.33a) and (10.33b) the symmetrical components of mail and auxiliary winding currents with reference to the min winding can be expressed as

which is represented by the Equivalent Circuit of Single Phase Induction Motor of Fig. 10.23(a).

where Z̅1a is the winding impedance of the auxiliary winding which in general has a capacitor included in it (starting/running capacitor). Using Eqs (10.36a) and (10.36b),

whose Equivalent Circuit of Single Phase Induction Motor representation is given in Fig. (10.23b). 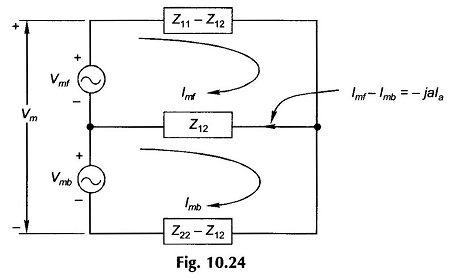 It is further noted that

From these the Equivalent Circuit of Single Phase Induction Motor of Fig. 10.24 can be drawn in the form of Fig.10.25. In Fig. 10.25 disconnecting the auxiliary winding under running condition is equivalently represented as the opening of switch S. 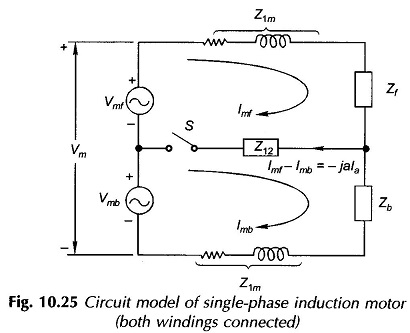 Once the auxiliary Winding is disconnected.

By doubling the current and reducing the impedance to half the circuit model of Fig. 10.26 is obtained. It may be seen that this is the same circuit model as already presented in Fig. 10.5(c) on a heuristic basis. 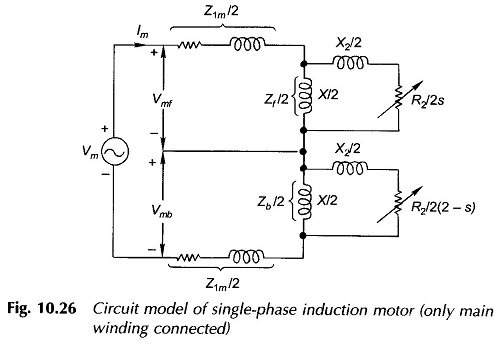 The winding currents are then given by

The developed torque and mechanical power are given by