Single Phase Induction Motor Types – As far as normal running is concerned, a single winding is sufficient. But all motors must be self start. The auxiliary winding is provided to produce finite torque at standstill and is displaced in space with respect to the main winding. Current in second winding is supplied from same Single Phasesource as the main winding, but is caused to have a phase difference by various methods which are discussed later. The combination of a space displacement between the two windings together with a time displacement between the currents, produces a machine which has a finite torque at standstill, and therefore, it can self start. Such a motor can be reversed by changing the phase sequence, which requires that polarity of one of the windings be reversed.

Earlier it was a common practice to use the auxiliary winding only during start and run-up. It used to be be disconnected with the help of a centrifugal switch, or relay once the motor speed reaches around 75% of the full speed. In such an arrangement auxiliary winding can have lower rating and its parameters can be chosen to improve the starting performance. But then switching arrangement is a disadvantage. Present practice is to use auxiliary winding all the time but then its parameters are to be chosen to provide a compromise between starting and running performance and its rating has to be chosen on continuous basis.

Single Phase Induction Motor Types are classified based on starting arrangement. Some commonly used motors are described below. 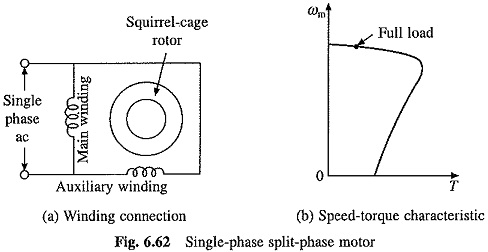 The nature of speed-torque characteristics is shown in Fig. 6.62(b). Starting torque is approximately 150 to 200% of full-load torque and starting current is high six to eight times the full-load current.

These have two windings, viz. main and auxiliary. A capacitor is connected in series with the auxiliary winding to provide phase-shift between the currents of auxiliary and main windings (Fig. 6.63(a)). Since the capacitor is used all the time (both during starting and normal running), such motors are called capacitor-run motors. Capacitor value is chosen to obtain nearly 90° phase shift between the currents of main and auxiliary windings around full-load speed. Motor works as a balanced two-phase motor eliminating backward rotating field and second harmonic torques. Therefore, motors has good running power factor, efficiency, and quiet and smooth operation.

The construction of stator of a shaded pole motor is different from other Single Phase Induction Motor Types. Typical construction of a four-pole motor is shown in Fig. 6.64(a). A two pole motor may use the construction of Fig. 6.64(b). The stator has a salient pole, with a single-phase winding. A small portion of each pole is surrounded by a copper ring, called shading coil. The alternating flux created by ac excitation of the main winding induces emf in the sanding coil in which current flows. Because of the inductive nature, shading coil current causes flux in the shaded portion to be delayed in time phase with respect to the flux in the unshaded portion of the pole. Space and time phase displacements between fluxes of unshaded and shaded portions produce a sort of rotating flux which periodically shifts from unshaded to shaded portion. The rotor turns from unshaded to shaded portion. Its direction of rotation cannot be reversed. 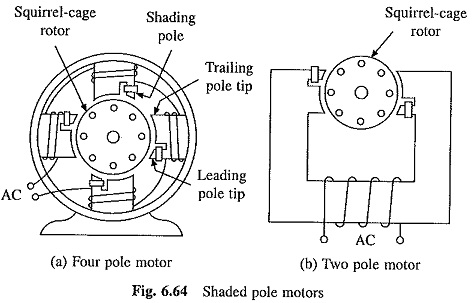 Since flux does not rotate through 360° but sweeps over pole faces only and the phase angle displacement between two fluxes is rather small, the motor has a low starting torque, but good enough to turn small loads. Motor is therefore available in small sizes 1/300 to 1/10 kW. Because of simple construction, particularly for two poles (Fig. 6.64(b)), the motor is very rugged and has low cost, efficiency and power factor. Applications include small fans, hair driers, gramophones, tape recorders and slide projectors.