What is Backward Diode? 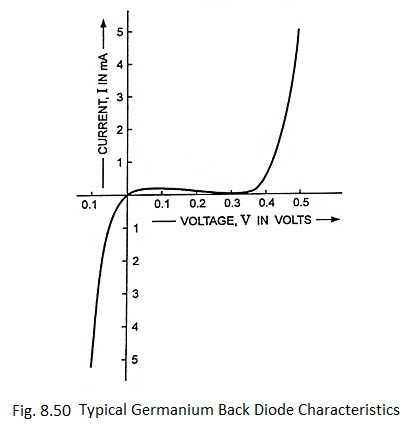 The diode has the same reverse characteristic as the tunnel diode but the forward characteristic as depicted in Fig. 8.50. In the neighborhood of zero voltage, in response to either a forward biasing or reverse biasing voltage, the tunnel diode responds with a current which is large in comparison with the corresponding current in a conventional diode. Such large currents are due to tunneling effect. In the back diode, the current due to tunneling effect is large only in the reverse direction. That is why, the back diode is also called a unilateral diode. The high conduction portion of V-I characteristic depicted in Fig. 8.50 is in the third quadrant. As this portion of the characteristic corresponds to the region of forward conduction in a conventional diode, it is customary to plot the back diode with the voltage and current scales both reversed.