Figures 2-4 and 2-5 show typical Forward and Reverse Bias Characteristics of Diode for low-current silicon and germanium diodes. From the silicon diode characteristics in Fig. 2-4, it is seen that the forward current (IF) remains very low (less than microamps) until the diode forward-bias voltage (VF) exceeds approximately 0.7  V. Above 0.7 V, IF increases almost linearly with increase in VF. 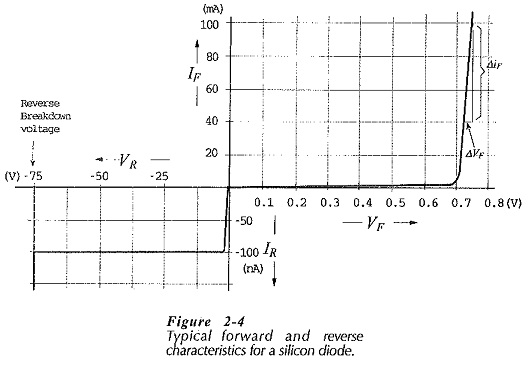 Because the diode reverse current (IR) is very much smaller than its forward current, the reverse characteristics are plotted with expanded current scales. For a silicon diode, IR is normally less than 100 nA, and it is almost completely independent of the reverse-bias voltage. As already explained, IR is largely a minority charge carrier reverse saturation current. A small increase in IR can occur with increasing reverse-bias voltage, due to some minority charge carriers leaking along the junction surface. For a diode with the characteristics in Fig. 2-4, the reverse current is typically less than 1/10,000 of the lowest normal forward current level. Therefore, IR is quite negligible when compared to IF, and a reverse-biased diode may be treated almost as an open switch. 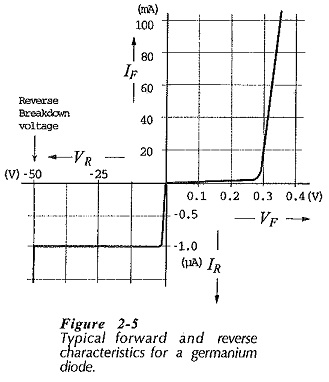 The Forward and Reverse Bias Characteristics of Germanium Diode are similar to those of a silicon diode, with some important differences. The forward voltage drop of a germanium diode is typically 0.3 V, compared to 0.7 V for silicon. For a germanium device, the reverse saturation current at 25°C may be around 1 μA, which is much larger than the reverse current for a silicon diode. Finally, the reverse breakdown voltage for germanium devices is likely to be substantially lower than that for silicon devices.

The lower forward voltage drop for germanium diodes can be a distinct advantage. However, the lower reverse current and higher reverse breakdown voltage of silicon diodes make them preferable to germanium devices for most applications.

The diode parameters of greatest interest are:

The values of these quantities are normally listed on the diode data sheet provided by device manufacturers. Some of the parameters can be determined directly from the Forward and Reverse Bias Characteristics of Diode. For the silicon diode characteristics in Fig. 2-4, VF ≈ 0.7 V, IR = 100 nA, and  VBR = 75 V. 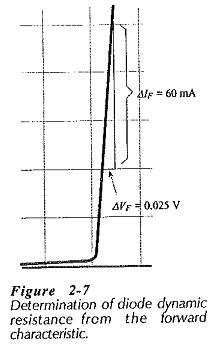 The dynamic resistance can also be calculate from the equation, 26