Diode Approximations – As we know already that, a diode is essentially a one-way device, offering a low resistance when forward biased, and a high resistance when biased in reverse. An ideal diode (or perfect diode) would have zero forward resistance and zero forward voltage drop. It would also have an infinitely high reverse resistance, which would result in zero reverse current. Figure 2-8(a) shows the current/voltage characteristics of an ideal diode. 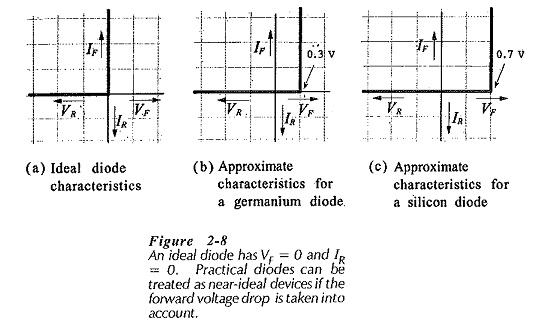 Although an ideal diode does not exist, there are many applications where diodes can be assumed to be near-ideal devices.

In circuits with supply voltages much larger than the diode forward voltage drop, VF can be assumed constant without introducing any serious error. Also, the diode reverse current is normally so much smaller than the forward current that the reverse current can be ignored. These assumptions lead to the near-ideal, or approximate, characteristics for silicon and germanium diodes shown in Fig. 2-8(b) and (c). 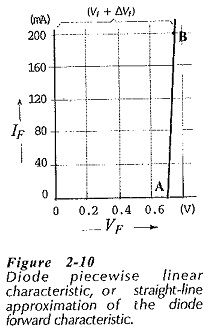