What is Vacuum Diode, Construction, Working and Applications:

Construction of Vacuum Diode – Vacuum diode is the simplest form of the electron tube for the production and control of free electrons. A typical vacuum diode is shown in Fig. 5.1. It consists of two electrodes—a cathode and an anode (or plate) mounted on a base and enclosed within a highly evacuated envelope of glass or metal. Cathode serves as an emitter of electrons and anode (or plate) surrounds the cathode and acts as a collector of electrons. The cathode may be a simple filament of tungsten or thoriated tungsten. Alternatively, it may be a nickel tube coated with barium oxide or strontium oxide and heated by an insulated filament, as illustrated in Fig. 5.1(c).

The greatest emission efficiencies are available with oxide-coated cathodes, but filament cathodes are toughest. Anode is usually a hollow metallic cylinder. In low-power tubes the anode is usually of nickel or iron but in case of high-power tubes, tantalum, molybdenum, or graphite may be employed because they do not deteriorate as rapidly as iron or nickel at high temperatures. The anode is made large enough to dissipate heat without excessive rise in temperature. Often the anode is fitted with cooling fins so as to remove the heat produced at the anode. Further the anode surface is usually blackened and roughened for easy removal of heat. The necessary pin connections are brought out at the bottom of the tube through airtight seals. The basic structure and circuit symbol of a vacuum diode are given in Figs. 5.1 (a) and (b) respectively.

The operation of a diode is based on the basic law of electricity which states that like charges repel each other and unlike charges attract each other. Electrons emitted from the cathode of an electron tube are negative electric charges. These charges may be either attracted to or repelled from the anode of a diode tube, depending on whether the anode is positively or negatively charged. 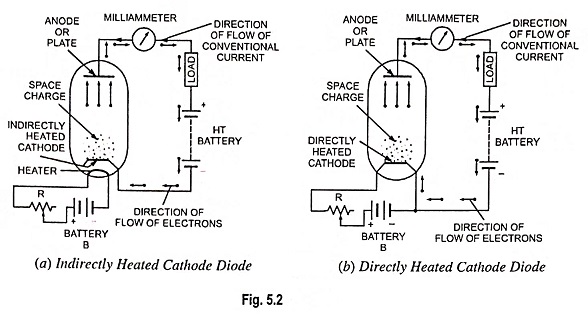 When a metallic cathode is heated sufficiently (directly or indirectly) an invisible cloud of electrons is set free in the space to form the space charge. The space charge exerts a repelling force on the electrons being emitted from the cathode. If the anode (or plate) is made positive w.r.t. cathode (by connecting anode to the positive terminal of an ht battery and cathode to the negative terminal, as illustrated in Fig. 5.2), an electric field is created extending from anode to cathode and the electrons from the space charge are attracted by the anode and consequently a current flows through the tube.

Upon reaching the plate the electrons continue to flow through the external circuit made up of connecting wire, milliammeter and the battery. The arriving electrons are absorbed into the +ve terminal of the battery and equal number of electrons flow out from -ve terminal of battery and return to the cathode, thus replenishing the supply of electrons lost by emission. As long as cathode of the tube is maintained at emitting temperature and the anode remains positive, electrons will continue to flow from cathode to anode within the tube and from anode back to cathode through external circuit. It should be noted that the direction of flow of electrons is opposite to the assumed or conventional direction of flow of current in the circuit. In case the anode is made negative with respect to cathode; electrons would be driven back to the cathode and no current would flow in the circuit. This is because neither the plate is made of suitable material for electron emission nor it is hot enough to emit electrons.

The operation of a vacuum diode may be concluded as follows:

The circuit diagram for determining the characteris­tics of a diode is shown in Fig. 5.3. 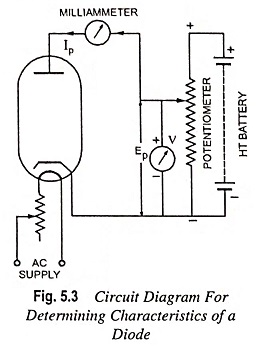 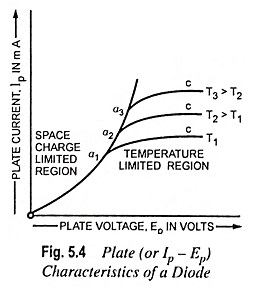 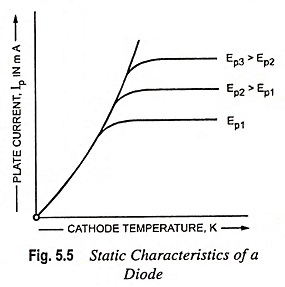 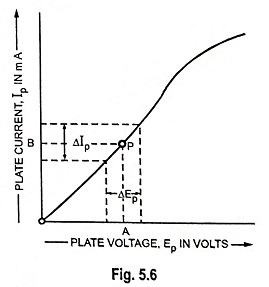 For the operating point P on the plate characteristic, the inverse of the slope of the tangent line to the characteristic at point P provides ac plate resistance.