What is Step Recovery Diode?

What is Step Recovery Diode? – It is also a voltage dependent variable capacitor diode but with unusual doping profile. It has concentration of charge carriers decreasing near the junction, as illustrated in Fig. 8.46, and therefore, a phenomenon, called the reverse snap-off is caused. It operates as an ordinary diode at low frequency i.e., it conducts in forward direction but not in reverse direction (or it recovers immediately from ON state to OFF state). But when driven forward-to-reverse by a high frequency (above a few MHz) signal it does not recover immediately. 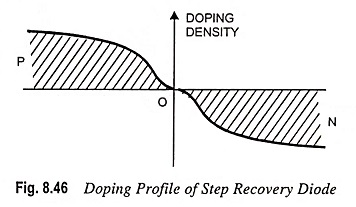 It looks as though the diode has suddenly snapped open during the early part of the reverse cycle. The snap-off current of a step-recovery diode is rich in harmonics and can be filtered to give a sinusoidal wave of a higher frequency. Because of this, step recovery diodes are useful in frequency multipliers, circuits whose output frequency is a multiple of the input frequency. Step-recovery diodes are also employed in pulse and digital circuits for generating very fast pulses with rise time of less than 1 nanosecond.