Two OTAs can be employed to behave as programmable resistor, as shown in Fig. 41.6. 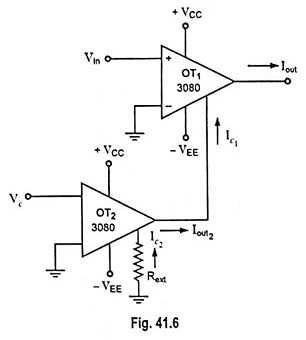 OTA Circuit for Realization of a Grounded Resistor: Figure 41.7 shows an OTA circuit that realizes a grounded resistor with a value that can be controlled by current Ic. 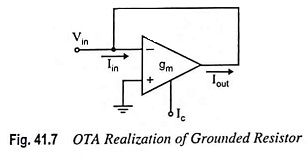 The input impedance is

If the input leads of the OTA are interchanged, the circuit yields a short circuit stable negative resistor with ZIN ≈ 1/gm.

OTA Circuit for Realization for a Floating Resistor: Figure 41.8 depicts a circuit that can realize a floating resistor. 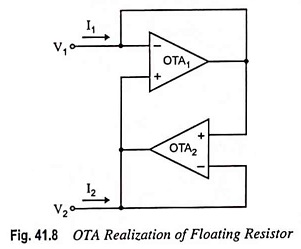 Using the ideal model and solving for I1 and I2, we have

and the circuit realizes a floating resistor of value 1/gm.

The two circuits shown in Figs. 41.7 and 41.8 permits the construction of active filters without the use of resistors. Thus, transconductance C filters can be realized and such filters are attractive for monolithic Ic realizations.

For active filters, adders (summers) and integrators are also required which are discussed in the forthcoming sections.