Figure 10.17 shows a typical Shaded Pole Motor with a squirrel-cage rotor. A small portion of each pole is covered with a short-circuited, single-turn copper coil called the shading coil. The sinusoidally-varying flux created by ac (single-phase) excitation of the main winding induces emf in the shading coil. As a result, induced currents flow in the shading coil producing their own flux in the shaded portion cf the pole.

Let the main winding flux be

The emf induced in the shading coil is given by

Let the impedance of the shading coil be

The current in the shading coil can then be expressed as

The flux produced by isc is

Where R = reluctance of the path of Φsc 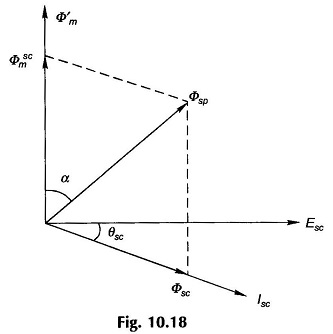 The two sinusoidally varying fluxes Φ̅′m and Φ̅′sp are displaced in space as well as have a time phase difference (α) thereby producing forward and backward rotating fields which create a net torque.

A typical torque-speed characteristic of Shaded Pole Motor is shown in Fig. 10.19. It may be seen that the motor is self-starting unlike a single-winding, single-phase motor.

The fact that the Shaded Pole Motor is single-winding (no auxiliary winding), self-starting motor makes it less costly and results in rugged construction. The motor has low efficiency and low power factor and is usually available in a range of 1/300 to 1/20 kW. It is used for domestic fans, record players and tape recorders, humidifiers, slide projectors, small business machines, etc. The shaded pole motor working principle is used in starting electric clocks and other single-phase synchronous timing motors.