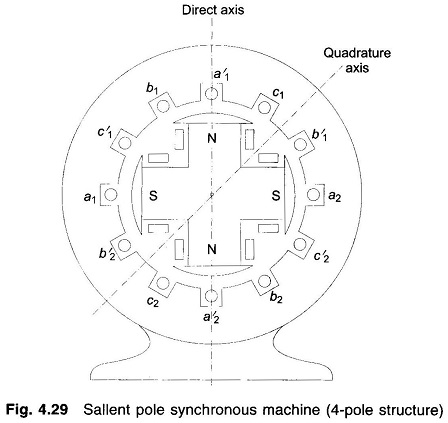 Since a salient pole machine offers different reactances to the flow of Id and lq components of armature current Ia, a circuit model cannot be drawn.

The Phasor Diagram of Salient Pole Synchronous generator is shown in Fig. 4.30. It can be easily drawn by following the steps given below: 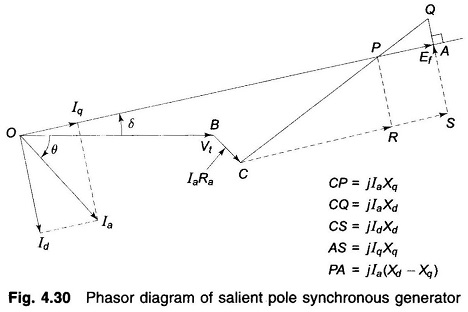 The first term is the same as for a round rotor machine with Xs = Xd and constitutes the major part in power transfer. The second term is quite small (about 10-20%) compared to the first term and is known as reluctance power.

P versus δ is plotted in Fig. 4.31. It is noticed that the maximum power output occurs at δ < 90° (about 70°). Further dp/dδ (change in power per unit change in power angle for small changes in power angle), called the synchronizing power coefficient, in the operating region (δ < 70°) is larger in a salient pole machine than in a round rotor machine. 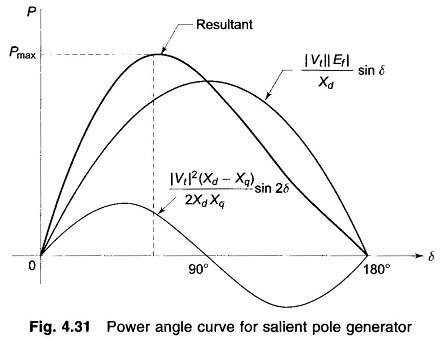 Here, we shall neglect the effect of saliency and take

in all types of power system studies considered.

During a machine transient, the direct axis reactance changes with time acquiring the following distinct values during the complete transient.

While selecting a large generator, besides rated MVA and power factor, the greatest allowable stator and rotor currents must also be considered as they influence mechanical stresses and temperature rise. Such limiting parameters in the operation are brought out by means of an operating chart or performance chart. 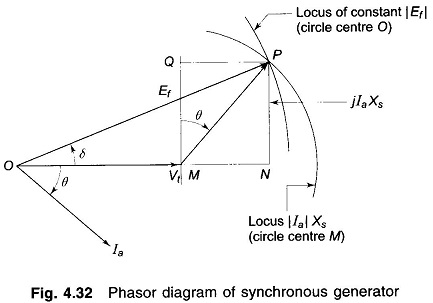 For simplicity of analysis, the saturation effects, saliency, and resistance are ignored and an unsaturated value of synchronous reactance is considered. Consider Fig. 4.32, the phasor diagram of a cylindrical rotor machine. The locus of constant |Ia|Xs,|Ia| and hence MVA is a circle centered at M. The locus of constant |Ef| (excitation) is also a circle centered at O. As MP is proportional to MVA, QP is proportional to MVAR and MQ to MW, all to the same scale which is obtained as follows.

Consider now the chart shown in Fig. 4.33 which is drawn for a synchronous machine having X3 = 1.43 pu. For zero excitation, the current is 1.0/1.43 = 0.7 pu, so that the length MO corresponds to reactive power of 0.7 pu, fixing both active and reactive power scales. 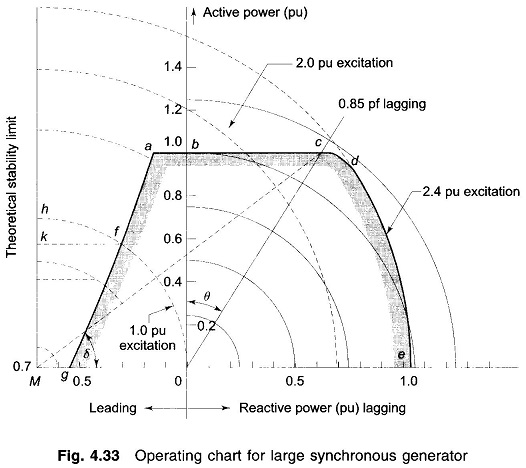 With centre at 0 a number of semicircles are drawn with radii equal to different pu MVA loadings. Circles of per unit excitation are drawn from centre M with 1.0 pu excitation corresponding to the fixed terminal voltage OM. Lines may also be drawn from 0 corresponding to various power factors but for clarity only 0.85 pf lagging line is shown. The operational limits are fixed as follows.

Taking 1.0 per unit active power as the maximum allowable power, a horizontal limit-line abc is drawn through b at 1.0 pu. It is assumed that the machine is rated to give 1.0 per unit active power at power factor 0.85 lagging and this fixes point c. Limitation of the stator current to the corresponding value requires the limit-line to become a circular arc cd about centre 0. At point d the rotor heating becomes more important and the arc de is fixed by the maximum excitation current allowable, in this case assumed to be |Ef| = 2.40 pu (i.e. 2.4 times |Vt|. The remaining limit is decided by loss of synchronism at leading power factors. The theoretical limit is the line perpendicular to MO at M (i.e. δ = 90°), but in practice a safety margin is brought in to permit a further small increase in load before instability. In Fig. 4.33, a 0.1 pu margin is employed and is shown by the curve afg which is drawn in the following way.

Consider a point h on the theoretical limit on the |Ef| = 1.0 pu excitation arc, the power Mh is reduced by 0.1 pu to Mk; the operating point must, however, still be on the same |Ef| arc and k is projected to f which is the required point on the desired limiting curve. This is repeated for other excitations giving the curve afg. The complete working area, shown shaded, is gfabcde. A working point placed within this area at once defines the MVA, MW, MVAR, current, power factor and excitation. The load angle δ can be measured as shown in the figure.