The heat developed at the collector-base junction of a transistor must flow from the junction to the transistor case, then from the case to the heat sink, and finally from heat sink to the surrounding air. Each portion of the path that the heat must pass through has a thermal resistance. These thermal resistances are θjC (junction to case), θCS (case to sink), and θSA (sink to air). 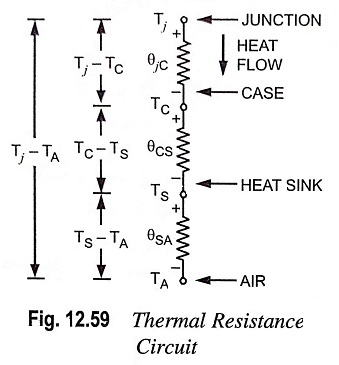 Thermal equivalent circuit for the transistor and heat sink is depicted in Fig. 12.59. This consists of the three thermal resistances connected in series. The size of heat sink required for a transistor with given power dissipation, PD may be determined from the thermal equivalent circuit. The temperature difference between the transistor collector-base junction and the air surrounding the heat sink (Tj – TA) causes the dissipated power (PD) to flow through each of the thermal resistances in series.

The condition required to avoid the thermal runaway is given below :

where PC is the heat released at collector and PD is the maximum power dissipated.

Differentiating above equation w.r.t. Tj, we have

The condition expressed by Eq. (12.53) is the condition which must be satisfied to avoid thermal runaway. By suitable design, it is possible to ensure that the transistor cannot runaway before a specified ambient temperature or even under any condition.