The heat released during the combustion of coal, oil or gas is used in a boiler to raise steam. In India heat generation is mostly coal based except in small sizes, because of limited indigenous production of oil. Therefore, we shall discuss only coal fired boilers for raising steam to be used in a turbine for electric generation. The chemical energy stored in coal is transformed into electric energy in Thermal Power Station plants.

The heat released by the combustion of coal produces steam in a boiler at high pressure and temperature, which when passed through a steam turbine gives off some of its internal energy as mechanical energy. The axial flow type of turbine is normally used with several cylinders on the same shaft. The steam turbine acts as a prime mover and drives the electric generator (alternator). A simple schematic diagram of a coal based thermal power plant is shown in Fig. 1.4.

The efficiency of the overall conversion process is poor and its maximum value is about 40% because of the high heat losses in the combustion gases and the large quantity of heat rejected to the condenser which has to be given off in cooling towers or into a stream/lake in the case of direct condenser cooling. The steam power station operates on the Rankine cycle, modified to include superheating, feed-water heating, and steam reheating. The thermal efficiency (conversion of heat to mechanical energy) can be increased by using steam at the highest possible pressure and temperature. With steam turbines of this size, additional increase in efficiency is obtained by reheating the steam after it has been partially expanded by an external heater. The reheated steam is then returned to the turbine where it is expanded through the final states of bleeding.

To take advantage of the principle of economy of scale (which applies to units of all sizes), the present trend is to go in for larger sizes of units. Larger units can be installed at much lower cost per kilowatt. They are also cheaper to operate because of higher efficiency. They require lower labour and maintenance expenditure. According to Chaman Kashkari there may be a saving of as high as 15% in capital cost per kilowatt by going up from a 100 to 250 MW unit size and an additional saving in fuel cost of about 8% per kWh. Since larger units consume less fuel per kWh, they produce less air, thermal and waste pollution, and this is a significant advantage in our concern for environment. The only trouble in the case of a large unit is the tremendous shock to the system when outage of such a large capacity unit occurs. This shock can be tolerated so long as this unit size does not exceed 10% of the on-line capacity of a large grid. 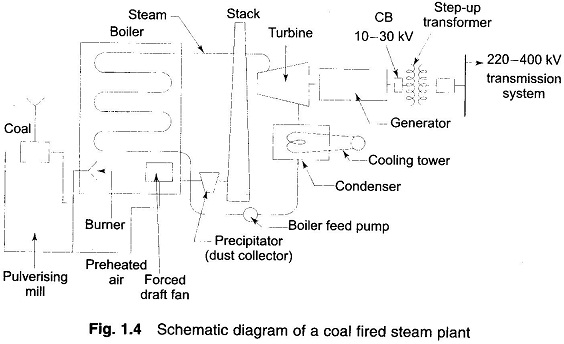 In India, in 1970s the first 500 MW Thermal Power Station superthermal unit had been commissioned at Trombay. Bharat Heavy Electricals Limited (BHEL) has produced several turbogenerator sets of 500 MW capacity. Today’s maximum generator unit size is (nearly 1200 MW) limited by the permissible current densities used in rotor and stator windings. Efforts are on to develop super conducting machines where the winding temperature will be nearing absolute zero. Extreme high current and flux densities obtained in such machines could perhaps increase unit sizes to several GWs which would result in better generating economy.

Air and thermal pollution is always present in a coal fired steam plant. The air polluting agents (consisting of particulates and gases such as NOX, CO, CO2, oxides of sulphur, etc.) are emitted via the exhaust gases and thermal pollution is due to the rejected heat transferred from the condenser to cooling water. Cooling towers are used in situations where the streamflake cannot withstand the thermal burden without excessive temperature rise. The problem of air pollution can be minimized through scrubbers and electro-static precipitators and by resorting to minimum emission dispatch and Clean Air Act has already been passed in Indian Parliament.

The main problem with coal in India is its high ash content (up to 40% max). To solve this, fluidized bed combustion technology is being developed and perfected. The fluidized-bed boiler is undergoing extensive development and is being preferred due to its lower pollutant level and better efficiency. Direct ignition of pulverized coal is being introduced but initial oil firing support is needed.