What is Surge Current? – Definition and Workings 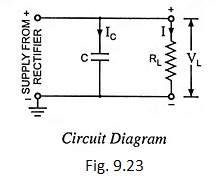 Before switching on of power supply, the filter capacitor is uncharged [Fig. 9.23]. At the instant the power supply is switched on, the uncharged capacitor behaves like a short, and therefore, the initial charging current may be quite large. In the worst case, the circuit may be energized at the instant when the supply voltage is at its peak. The only thing that impedes the charging current is the resistance of the transformer windings and the bulk resistance of diodes. This is the reason that the initial charging current is very large. As the capacitor charges, the current diminishes to lower levels. The sudden gush of current at the instant of switching on of power supply is called the surge current. A designer has to make sure that the diodes employed can withstand the surge current. Ordinarily, the designer of the power supply will select a diode with enough current rating to withstand the surge current.

The key to surge current is the filter capacitor size. If the filter capacitor is of capacity lesser than 1,000 μF, the surge current is usually too brief in duration to cause any damage to the diodes. But in case of capacities of capacity exceeding 1,000 μF, the duration of charging is longer (many cycles) and diodes may get damaged. Occasionally, a designer may decide to use a surge resistor rather than to select a diode of higher rating or capacitor of smaller size.

Surge resistor is a small resistor inserted between the rectifier and the capacitor input filter, as shown in Fig. 9.24. By including the surge resistor, the surge current can be reduced to a safer value. Surge resistors are not employed very often and are mentioned just in case you see one use in power supply.