SCRs are very useful in ac circuits where they may serve as rectifiers whose output current can be controlled by controlling the gate current. An example of this type of application is the use of SCRs to operate and control dc motors or dc load from an ac supply. The circuit using an SCR as half wave rectifier is shown in Fig. 26.30 (a). The ac supply to be rectified is applied to the primary of the transformer ensuring that the negative voltage appearing at the secondary of the transformer is less than reverse breakdown voltage of the SCR. The load resistance RL is connected in series with anode. A variable resistance r is inserted in the gate circuit for control of gate current. 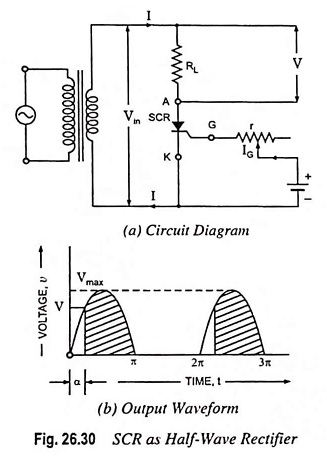 During the -ve half cycles of ac voltage appearing across the secondary, the SCR does not conduct regardless of the gate voltage, because anode is negative w.r.t. cathode and also peak inverse voltage is less than the reverse breakdown voltage. The SCR will conduct during the +ve half cycles provided appropriate gate current is made to flow. The gate current can be varied with the help of variable resistance r inserted in the gate circuit for this purpose. The greater the gate current, the lesser will be the supply voltage at which SCR will start conducting.

If the angle at which the SCR starts conducting (i.e., firing angle) is α, the conduction will take place for (π – α) radians.

Thus the desired value of average current, Iav can be obtained by varying firing angle α.

i.e., average current decreases with the increase in value of firing angle α.

The output voltage from the SCR rectifier is not a purely dc voltage but also consists of some ac components, called the ripples, along it. The ripple components are undesirable and need to be removed or filtered out.