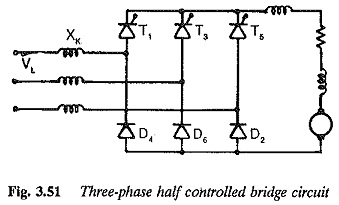 A thyristor and a diode conduct at any given time the diode is forward biased at the natural firing instant. A thyristor conducts, even if it is reverse biased, until the next thyristor in the sequence is fired. Thus there is a natural free wheeling of the load current via the incoming diode and outgoing thyristor. The load voltage is zero during the free wheeling period. Free wheeling due to conduction of diode does not allow negative excursions of load voltage. This reduces the ripple content in the output voltage. The ripple frequency of the output voltage at α = 0 is 6f. For α < 60°, free wheeling does not take place since the voltage is always positive on the dc side. The negative instantaneous value does not occur. Free wheeling takes place only when α ≥ 60°. The ripple frequency decreases to 3f at these firing angles (α ≥ 60°). The ripple voltage is less at a = 60° and it increases for α > 60°. Compared to a fully controlled converter, the smoothing inductance required is large at α = 90°, even though there is inherent free wheeling.

The average values of dc voltage can be obtained as (Fig. 3.52) 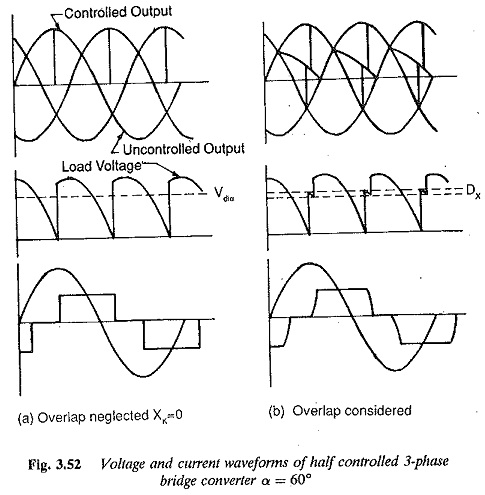 Considering the voltage drops due to the reactances (overlap), resistances and the device drops, the dc voltage in the operating region

The rms value of current

There is a saving of control reactive power but not of commutation reactive power. The power ibctor as a function of Vdiα/Vdio is depicted in Fig. 3.53. An improvement in the power factor can be seen in the range 0° < α < 180°. The value of g is the same as for a fully controlled converter in the range 0 < α < 60°. 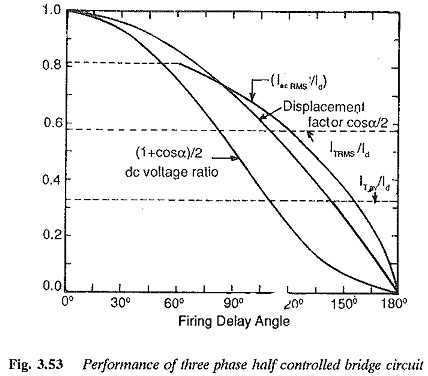 For highly inductive loads and small firing angles the converter shows the phenomenon of half waving. This can be prevented by means of the FWD across the load.

When only unidirectional applications are involved it is advantageous to use Three phase half controlled bridge circuit as they provide the following special features over two quadrant converters:

1. The converters are economical as half the positions are occupied by

2. The firing circuit provides signals only to half the number of thyristors and therefore are simple and less costly.

4. The voltage variation is between a maximum value and (near about) zero when the firing angle varies from 0 to 180°. However the inverter limit does not allow a to equal 180° and hence the voltage cannot go to Zero output voltage can be obtained by supplying the component converter with different voltages. The converter transformer having two secondaries of appropriate turns feeds the converters. The voltage supplied to the controlled portion is 10% larger than that supplied to the uncontrolled one.

5. The amplitude of ripple decreases and hence the amount of smoothing inductance required is less. This is because natural free wheeling does not allow negative excursions of voltage.

6. The ripple frequency is half that of a fully controlled converter (3-phase converters).