When the resistance to be measured is of the order of magnitude of bridge contact and lead resistance, a modified form of Wheatstone’s bridge, the Kelvins Bridge is employed.

Kelvins Bridge is a modification of Wheatstone’s bridge and is used to measure values of resistance below 1 Ω. In low resistance measurement, the resistance of the leads connecting the unknown resistance to the terminal of the bridge circuit may affect the measurement. and the usual balance equations for the bridge give the relationship

Equation (11.8) is the usual Wheatstone’s balance equation and it indicates that the effect of the resis­tance of the connecting leads from point a to point c has been eliminated by connecting the galvanometer to an intermediate position, b.

The above principle forms the basis of the construction of Kelvin’s Double Bridge, popularly known as Kelvin’s Bridge. It is a Double bridge because it incorporates a second set of ratio arms. Figure 11.11 shows a schematic diagram of Kelvin’s double bridge. 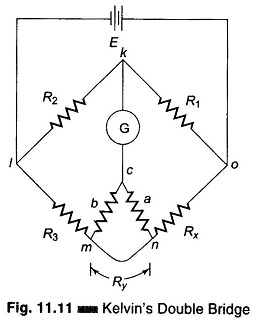 The second set of arms, a and b, connect the galvanometer to a point c at the appropriate potential between m and n connection, i.e. Ry. The ratio of the resistances of arms a and b is the same as the ratio of R1 and R2. The galvanometer indication is zero when the potentials at k and c are equal. Contact potential drops in the circuit may cause large errors. This effect is reduced by varying a standard resistance consisting of nine steps of 0.001 Ω each, plus a calibrated manganin bar of 0.0011 Ω with a sliding contact. When both contacts are switched to select the suitable value of standard resistance, the voltage drop between the ratio arm connection points is changed, but the total resistance around the battery circuit is unchanged.

This arrangement places any contact resistance in series with the relatively high resistance value of the ratio arms, rendering the contact resistance effect negligible. The ratio R1/R2 is selected (as given in Fig. 11.13) such that a relatively large part of the standard resistance is used and hence Rx is determined to the largest possible number of significant figures. Therefore, measurement accuracy improves.