The third communication channel, mobile radio channel, extends the capability of the public telecommunications network by introducing mobility into the network by virtue of its ability to broadcast.

The term ‘mobile radio’ is usually meant to encompass terrestrial situations where a radio transmitter or receiver is capable of being moved, regardless of whether it actually moves or not. Basically, there is no ‘line-of-sight’ path for communication, rather, radio propagation takes place mainly by way of scattering from the surfaces of the surrounding buildings and by diffraction over and/or around them.

Therefore, the energy reaches the receiving antenna via more than one path. Therefore, in a mobile radio environment, we face a problem of multipath phenomenon in the sense that the various incoming radio waves reach their destination from different directions and with different time delays. Because of this, the received signal strength varies with location in a very complicated manner and therefore, a mobile radio channel may be viewed as a linear time-varying channel that is statistical in nature. 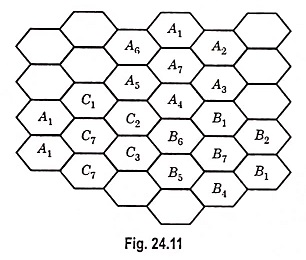 Cellular Mobile Radio System have come in a big way in the global market for providing telephone services to people on the move. The basic cellular mobile radio system shown in Fig. 24.10. These can he adopted for fixed cellular applications also, the principle being the same. 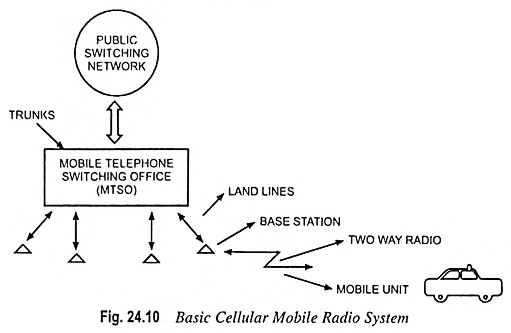 In cellular mobile radio system, the geographical area under consideration is divided into a number of cells as shown in Fig. 24.11. These cells are usually hexagonal in shape and are organized into clusters with most cellular systems using seven cells cluster. The radio channels are allocated across the seven channels. The clusters are then repeated over and over again to cover the entire geographical area served by the system. Since cells using the same channels are separated from each other, and also since the transmitted signal power is low, interference is less likely. The shape of the cells need not always be hexagonal but depends on the terrain the radio propagation. Cells in a cellular system permit frequency reuse without interference.

Cellular mobile radio system provide an excellent breakthrough as they permit ‘frequency reuse’ in non-adjacent cells. That is, the same frequency channels can be used in different cells which are separated by a sufficient distance, without interference.

The compact cellphone is a very complex piece of digital engineering which has been made possible by advanced ICs and advancements in telecom technology. As a matter of fact the handset can be thought to consist of two units—the mobile terminal (or the phone itself) and the Subscriber Identity Module (SIM). The SIM is a credit card-sized plastic module which fits into your mobile phone. This SIM is ‘smart card’, and consists of all the subscriber related information, like your cellular identification number and other preferences. It can also be used for storing messages and phone numbers.

It also enables charges to be automatically billed to the card holder, regardless of who owns the phone. This means that if your handset is out of order, you can always use any other handset, with your SIM card without affecting the other person’s billing.

Functionally, the handset itself may be divided into three main parts. Terminal adaptations, radio modem and the radio frequency (RF) unit. Terminal adaptations comprise the human user interface elements (like the mic, speaker, display and keyboard), and interfaces to other equipment, such as a PC or a PCMCIA data card.

The radio modem is a digital processing unit which handles the conversion of data or speech signals into digital form. It interfaces between the terminal adaptations and the RF (radio frequency) unit. This RF unit handles the actual wireless communication by receiving and transmitting radio signals to the cellular network.

When you dial a number on the keypad of the phone, the handset transmits the digits, with the help of a built-in radio transceiver, to a nearby radio base station (also called cell). A group of transceiver stations are controlled by a base station controller, which in turn is connected to a Mobile Switching Centre (MSC). The MSC, in turn, is linked to other cellular and fixed line networks.

All the switching functions within a GSM network can be handled by the MSC, which is the intelligence of the network and performs all the functions like call routing, cell control, switching, plus all accounting and charging activities.

Once a cell is forwarded to the MSC, it determines how to route the call and set up the required link to enable the conversation. If the call is destined for a fixed (or normal telephone) the MSC sends it to DOT’s public telephone exchange, over a leased line, which then switches the call to the desired telephone set.

However, it may be noted that if the call is destined for another mobile phone, things become more complicated. Firstly, the MSC has to figure out where the desired mobile phone is, and then forward the call to the radio base station (or cell) which is nearest to it.

But how does the MSC figure out where a particular cell phone is? It is assisted by cellphone in this task. When the handset is powered on, it initializes itself and scan the control channels. These control channels are special radio frequencies used by the cell transmitter to send and receive control data. Based upon the strength of the received signal, the handset assigns itself to a specific cell. In this process, it informs the cell of its location so that it may he passed. The handset keeps monitoring the data that is sent on the control channel till its own ID is paged-and then puts itself into the receiving mode.

How ever, if the handset is mobile, i.e., if the user is travelling by a car while calling, the cellular mobile radio system also needs to keep track of the phone and the call is progressed, so that it can automatically switch the call to another cell as the caller moves from one area to another. This process of switching calls between cells is user transparent, and is known as cell handoff.

Although as a user you never need to be actually aware of how the base station or the network and switching subsystems work, it helps to be knowledgeable about how they function so that you can take advantage of new services whenever they are offered by the service provider.